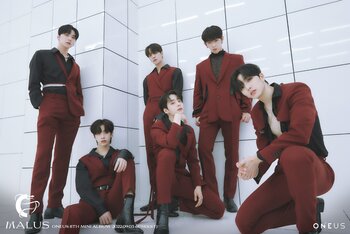 Six monarch-vampires ready for war. L-R  Keonhee, Xion, RAVN, Hwanwoong, Leedo, Seoho.
"It's not just about singing well and dancing well on stage. We have to show our own interpretation of the song so that viewers can enjoy and appreciate our performance."
— Hwanwoong
Advertisement:

ONEUS is a South Korean boy band that debuted on January 9, 2019 with the song Valkyrie and mini-album Light Us under Rainbowbridge World (RBW).

Nicknamed by media as "stage geniuses" and "trust to watch", ONEUS bring a sense of theatricality to their performances, and have been praised for their musical theatre style of storytelling through their music, lyrics, choreography, and acting.

ONEUS also carry an overarching storyline to their music videos, as outlined below:

Long ago, the human world was ruled by six monarchs. They were admired by everyone. But Helios, the God of the Sun, resented the monarchs. Blinded by jealousy over the humans' worship of the monarchs, Helios threatened the humans to make the sun disappear forever.

Eventually, the frightened humans sacrificed the six monarchs to Helios. Helios sent the six monarchs and their servants into exile, and created a world of eternal night, cursing upon them an endless thirst for the blood of the humans they cherished so much. Nevertheless, the monarchs only drank blood from evildoers, and continued to love and protect their dear humans. However, their cursed servants were disgusted by the humans' betrayal. Every night, they slaughtered human beings without mercy. They worshipped the moon and waited for a child to be born on the day of an eclipse - a child to be used for a ceremony to bring an eternal night.

On the day of the eclipse, a child was born as prophesied. The devastating war between the monarchs and their servants to protect the child lasted ten years. But as they tried to cut the neck of the last marquis who led the servants...

"When the red moon appears again, I will come back for the child."

The night the red moon rose, after a fierce battle, the monarchs found victory. The souls of the defeated were sealed inside a necklace. Yet the monarchs realized that as long as they existed together humans could never escape their bridle of pain.

Leaving this statement, the monarchs also relinquished their souls into the necklace. Helios' gaze disappeared into the eternal darkness beyond the unreachable sun.

Meanwhile, Helios grieved the loss of his son, Phaethon. His grieving sorrow turned to anger and that anger soon fell upon the monarchs who had fled to the darkness. Helios stripped away the monarchs' power and imprisoned them in a chamber made of the shattered remains of the sun chariot, sending them into an endless slumber. The only way to ever regain their strength and to escape was in taking the blood of the prophetic child's descendants that they so dearly loved and tried to preserve. This was the most powerful curse that Helios could bestow upon the monarchs.

Now, hundreds of years have passed since they have fallen into their slumber...