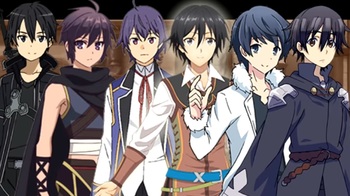 L - R: Kazuto Kirigaya/Kirito, Yuuto Suoh, Shin Wolford, Taichi Nishimura, Touya Mochizuki, Satou Pendragon
"He stands out from the crowd a little bit and has a dark brooding edge to him that lets you know that he's the most important dude around. He's just generic enough to project yourself onto, but just stylish enough to look like a cool guy when the chips are down and there's an ass to be kicked."
— Beatrice the Golden Witch, on The Asterisk War
Advertisement:

The Light Novel counterpart to the Stock Shōnen Hero. Since this archetype also comes from Japanese Media, it shares a lot of overlap but also plenty of differences. In fact, the Stock Light Novel hero would probably be the Stock Shōnen Rival in another series, except in this case, we're seeing the story through his eyes.

While the Stock Shōnen Hero is Hot-Blooded, Book Dumb, and usually starts off at the lower end of the Power Level food chain, the Stock Light Novel Hero is typically an Unfazed Everyman, Genius Bruiser, Deadpan Snarker or Stoic badass (except when he isn't) with power, skill, ability, or moral character that puts most other characters to shame. Further, very few shonen heroes are a Chick Magnet, and usually only have one "serious" Love Interest. The Light Novel hero commonly gains a harem, wanted or otherwise, without fail.

Appearance-wise, shonen heroes typically have outlandish costumes, bright and/or spiky hair, and rough facial features. The Light Novel protagonist is, more often than not, an Ordinary High-School Student, a NEET, or some other kind of Ridiculously Average Guy with dark and/or neat hair and soft facial features. Even in a fantasy setting, he'll probably be an attendee of the local Extranormal Institute or just your average blue-collar joe taking jobs at the Adventure Guild. Costume-wise, the Light Novel protagonist wears either an ordinary high school uniform or some other simple outfit, often equipped with a Badass Longcoat.

While shonen heroes focus more on "power growth" (training hard, and gradually strengthening their abilities to prove their worth), the Light Novel protagonist is focused more on "power acquisition". Rather than training to improve their abilities, the Light Novel protagonist usually starts out already nigh-unbeatable, and typically "unlocks" new abilities as the story goes on. Not through training, but merely as a consequence of adventuring or overcoming the Monster of the Week. If the hero is a Non-Action Guy, then his growing Battle Harem is often how he faces the Sorting Algorithm of Evil.

Another way to put this is comparing the powers of a shonen battle manga hero to a muscle that has to be trained and developed, and the light novel hero to a toolset required to progress the story. In fact, they may already have everything needed to succeed in the first place, but simply become a lot more stylish at it.

The light novels are markedly influenced by video games and mix in Dating Sim and Visual Novel elements, such as the most common "acquisition" that the light novel hero makes being new members to his harem. The very act of romancing the harem may also be how power is achieved.

As the genre evolves, it has split into several types of stock Light Novel protagonists, with their Unique Protagonist Asset being tweaked depending on the setting:

While this is not quite the Omnipresent Trope that its shonen cousin is (due to being newer), it's getting there. See our Analysis Page for a quick explanation on why this trope became so successful, so quickly.

See also Harem Genre for another genre it overlaps with, and Schoolgirl Series for one feminine counterpart. See also Marty Stu for a trope this archetype frequently overlaps with.

Also see Stock Light-Novel Calamity Princess, for one of his common Love Interests.