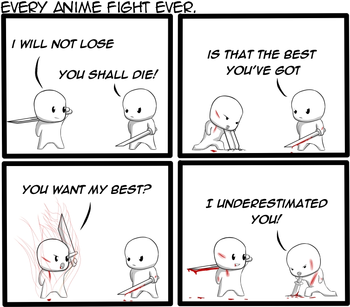 .
"Do you remember the first time when you were a child that you stood up and walked on your own? If you don't remember doing it, and yet you did it, it means that you weren't conscious of it at the time. So how did you know how to do it? The answer is all humans are born already knowing how to stand up. Just as birds are born knowing how to fly, and fish are born already knowing how to swim. It's because of what we call instinct. All living creatures use instinct to obtain their natural powers when the time comes that they need them."
— Yoruichi Shihouin, Bleach
Advertisement:

"Yamato-damashii" is loosely translated into "the spirit/soul of Japan", and defined as anything and everything which makes Japan (and the Japanese) unique, distinct, and great. Of course, this creates the logical question: What is "Japanese"?

At its most basic, Yamato-damashii implies pure merit and being or becoming "better". Japanese culture is rooted in a clan (or in-group)-based hierarchy system. Every person has a rank within their family, community, organization, and class the same way that some characters are more powerful or gifted than others. Each family, organization, and class has, in turn, a rank in society as a whole, reflected by Power Levels. By following Yamato-damashii, any person can increase their potential, and thus status, climbing to a higher rank in society while their True Companions help.

In fiction, it shows itself as a plethora of virtues, in words that may not translate directly into English well, but here we'll organize them into three forms: talent, insight, and persistence.

If you've ever read, seen or heard of a Japanese story with even a hint of a To Be a Master or Defeating the Undefeatable plot, this probably sounds familiar. The strongest characters in the work will demonstrate some of the tropes, but The Protagonist(s) will eventually become the epitome of it. The order and safety of our society is based on "rules". But what do you do if a threat comes along that completely disregards those "rules"? The answer is the Japanese Spirit. Japanese Spirit eschews certainty; it's why villains appear unbeatable at first and why more confident attacks rarely work.

In traditional Japanese philosophy, Persistence (hard work, hope, and spirit) was considered the most important and desirable of the three virtues, but takes time to develop. Resolve (moral rectitude and honor) appears once the hero finds something to fight for. Of the three, Talent is the most powerful, but least virtuous or important; with enough Presistence and Resolve, most heroes find that they actually had it all along. Yamato-Damashii believes that everyone will Die or Fly in their Darkest Hour, so even a weak-but-persistent person will prove themselves useful in the long run.

Rivals and antagonists, on the other hand, will be lacking in at least one virtue in comparison to the protagonist. Even an antagonist that starts out invincible will wind up defeated when this flaw is exposed. Sometimes, the Hero will reach their peak only via an 11th-Hour Superpower against the Big Bad. note Which is lifted directly from the concept of musubi (or, the power of creation), which is the divine spark that all souls have, but is only unlocked by the truly prosperous.

Ki, or some other equivalent Force, is often the manifestation of Yamato-Damashii and is almost all-powerful. Ki mastery will let you ignore injuries or No-Sell attacks entirely. There is usually a way to sense Ki or treat it like a measurable quantity that one person can have "more" or "less" of in a hierarchy of power.

As stated above, this trope defines what is good about Japanese culture. Thus, in the finale, Japanese Media will almost always need to demonstrate that it's superior. The Big Bad will typically achieve their One-Winged Angel form or have acquired the almighty MacGuffin so that when the hero finally succeeds, it is always with the knowledge that the villain was completely crushed despite every cheap trick. For this reason, heroes are duel the villain alone, or only with indirect support. After all, if Yamato-Damashii has transformed the hero into a "better" person, then proving it is more important than simply winning.. Others in a Five-Man Band may help the hero reach their destination, deal with specific threats or fight the Co-Dragons, but they will barely do anything more than buy time or distract the villain for the Final Battle.

A story setting doesn't actually need to be Japan to possess this trope. This is more about the general tone and logic that the story employs, which is more reflective of the setting it was created in than the one it takes place in.

Compare the Pillars of Moral Character, a separate but overlapping Japanese values system that more than likely defines what virtues the character's resolve springs from. Also compare Kawaisa, which is a later attempt at an idealized Japanese culture.

It's highly likely that the story structure is derived from Wuxia (Dragon Ball, the codifier of modern Shounen, was heavily inspired by wuxia). In America, the closest this concept approaches is the Superhero and Hollywood Action Hero. Westerns also have a similar feeling, but vastly different story structure.

Compare how well the concept fits into The Hero's Journey. Also, compare with stories that follow a Heroic Fantasy plot. The main character can also very easily be categorized as an Übermensch, with his or her nemesis being representative of the "Last Man". Any character that succeeds at Yamato-Damashii is likely to have Real-Life Super Powers in some form, if not actual Magic and Powers.

Contrast with the The Gift, where a character is extremely talented and may need little to no struggle to be strong; usually, these characters are defined by their talent and showcase the difference between the protagonist and his or her rival/antagonist.

See The Other Wiki for more information on yamato-damashii.

Also, read our own Analysis page for how the trope overlaps with Shintoism and other media.

For its rough American counterpart, see The American Dream. Also, see It Can't Be Helped. Not to be confused with the supernatural kind of spirits. For those, see Youkai.