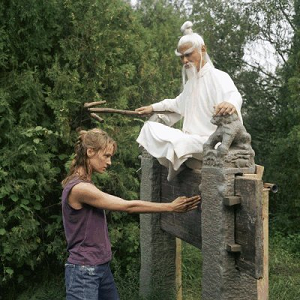 A wise Asian mentor to a typically Caucasian character.

The Magical Asian, like the Magical Negro or Magical Native American, exists to dispense lessons to Caucasian characters using the wisdom of his people. He (and it's almost always a he) will usually be a martial arts master, a practitioner of traditional Asian medicine, or a sage of some Eastern religion. If he is not explicitly supernatural, he will often be so highly skilled in his art that it will appear superhuman. Martial artists will be impossibly good fighters, the medicine-men will be able to easily diagnose and cure any illness (bonus points if he mentions chi or chakra), and the sage will be enlightened with some kind of supernatural intuition. Expect at least one scene of them meditating, growing bonsai trees or engaging in any other blatantly non-Western activity.

Their appearance almost always includes a beard, often long, as well as hairstyles and clothing typical of their respective culture, with bonus points added if theclothing is in fact some kind of ancient, traditional attire. They will often talk in You No Take Candle fashion, commonly with a heavy accent, and quote proverbs and Koans attributed to Confucius, Laozi, Buddha, or some other famous Asian sage.

Unlike the Magical Negro, the Magical Asian is not always nice to his Caucasian protégé. It is common for the Magical Asian to put his student through a number of demeaning and seemingly pointless tasks. However, it always turns out that there is a purpose to these tasks that helps get his lesson across, with Mr. Miyagi's famous "Wax On, Wax Off" routine being one of the best known examples. They also frequently have a habit of slapping their disciples with a hand, a stick, or a sandal, either to punish them for some misdemeanor or to lead them to enlightenment through an unexpected sensation. These tendencies are possibly related to Asian Rudeness.

He will often be referred to as sensei, sifu, master, or master sifu. Your training will be complete When You Snatch the Pebble from his hand.

Contrast with the Yellow Peril, who shares many of these traits (Asian, old, knowledgeable, thick accent, droopy moustache and antique dress sense) but is evil — and hence comes off as much more racially and culturally offensive (as opposed to the Magical Asian trope, which can seem clichéd and clueless but tends to at least be well-intentioned).