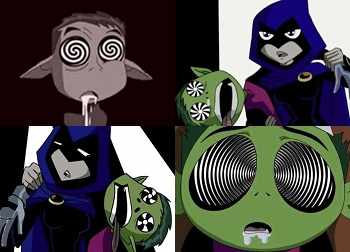 Heroes and willpower go together like bread and butter. They may be a Determinator with Heroic Resolve or Heroic Willpower, even perhaps capable of Fighting from the Inside to shake off Mind Control.

Then there's characters who just need an amateur hypnotist with a bit of twine and a bottle cap to be hopelessly under their control. These characters are Weak-Willed. They may be just as confident and resolute as anyone else, but they have absolutely no defense (or maybe a negative defense, if such a thing is possible) to mind control.

It's not just against mundane party game hypnotism, but also brainwashing or Psychic Powers. The Jedi Mind Trick can leave them in a day long haze, and Charm Person will make them lifelong love slaves. At times, they may boast they have an iron resolve that can't be broken, before being comically "switched on" to Minion or The Renfield just by glancing at the goofy swirly eyes. Their new master may even be unsettled by how readily they took to the conditioning. This type of character also faces the Power Perversion Potential of having sex without giving conscious consent — which, for those of you following along at home, is a form of rape.

A common variant is the "easily suggestible". Their weakness to brainwashing stems from a chronic wishy-washiness; if they're incapable of putting up resistance to mundane used car salesmen, how can they hope to fight off Hypnotic Eyes?

Truth in Television to a certain extent, since some people are more susceptible to hypnosis than others. But in Real Life, "highly suggestible" means about as susceptible to hypnosis as the average TV character is, since hypnosis is a lot less powerful than it's made out to be. But also interestingly inverted in Real Life, as hypnotizability is actually positively correlated with higher intelligence.

(Many of the mental characteristics that allow hypnosis to work, such as attention span, imagination, mental flexibility, and understanding of language and concepts, are more prevalent in the more intelligent. People with IQs below 80 are often considered effectively "unhypnotizable".)

If it's a friend rather than an enemy doing the hypnosis, expect it to devolve in Pygmalion Snapback or Teach Him Anger. Compare Extreme Doormat and Empty Shell.