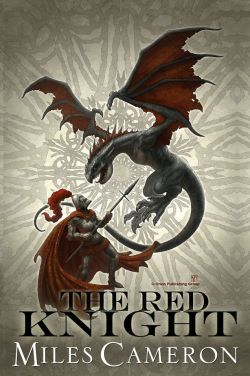 The Abbess of a fortified convent needs soldiers, as people under her charge are being killed by a wyvern and a nearby garrison is notoriously understaffed. To do the job, she hires a mercenary band led by a young fallen noble known only as The Red Knight.

The Red Knight might not have a name he'd wish to share, but he has much more — good birth, money, tactical brilliance, skill with magic, experience, loyalty of his men and hideous amounts of luck. But what should have been a routine monster hunt turns into something far more dangerous, and the wyvern is far from the only — or the most dangerous — monster plaguing the woods of Lissen Carak. Somebody's pulling the strings...

And so begins the story of The Traitor Son Cycle, an epic fantasy series by Miles Cameron (a pseudonym for historical fiction author Christian Cameron) which has five books:

As well as two short stories, available on author's website:

Tropes presented in the books are: