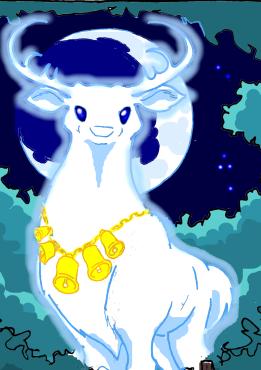 Even when giving advice, they can be impressive.
Advertisement:

Deer, being wild animals, can easily be magical and mysterious presences while still being hard to reach for humans.

Marvelous deer are often the quarry in hunts. Catching them may be another matter, especially since the marvelous deer tends to be a lone animal; herds of marvelous deer are impractical for maintaining the marvelousness. (For the same reason, the deer in Woodland Creatures is seldom this.) Besides their rarity, such magical deer are often almost supernaturally elusive, sometimes to the point of being literally uncatchable. It can lead to Follow the White Rabbit. This may be what The Wild Hunt is after, if they aren't hunting humans.

These creatures are commonly encountered in pristine, unspoilt lands, usually far from civilization. The Ghibli Hills and Enchanted Forest are among the more common places where the Marvelous Deer may be found.

For the deer to be white — or golden — is common. They are more likely to be stags, with magnificent antlers, but not overwhelmingly. A fawn adds connotations of innocence.

The common portrayal of white deer as magical figures in European mythologies and folklore is likely due to the fact that both the red deer (native to Europe since the last ice age) and fallow deer (introduced into continental Europe by the Romans and present in Great Britain since the first century AD) often produce leucistic specimens.note Leucism being a condition where melanin is absent but other pigments aren't, resulting in white or cream-colored animals. Since the gene that causes leucism is recessive, such white deer could appear suddenly out of a population of normally colored deer; this, to ancient people who did not know about genetics and inheritance beyond "like begets like" — a rule that such white animals would if anything seem to go against — would seem like a very mysterious and magical event. Combined with European cultures commonly viewing white as representing mysticality and purity, as well as white coats making their bearers stand out like ghosts in a forest's gloom, it isn't surprising that white deer feature as creatures of mystery and magic in many European folk traditions.

Contrast Bambification, as well as Moose Are Idiots for a much less favorable portrayal of cervids and Our Perytons Are Different and some portrayals of the Wendigo for a generally much less pleasant sort of mythical cervine creatures. See also Crown of Horns. Compare Genial Giraffe, Unicorns Are Sacred, and Kirin.