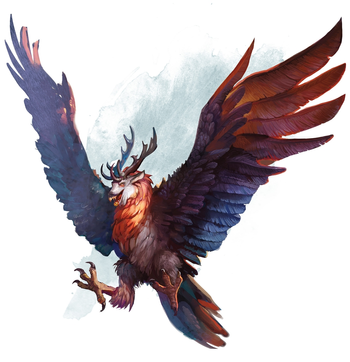 Perytons are chimeric creatures that combine the features of deer and birds; they are usually depicted with the forequarters and head of a deer and the hindquarters and wings of a bird, but the ratio of cervine to avian can vary between portrayals — perytons may range from deer with Pegasus-like wings to giant birds with deer heads.
Advertisement:

They are rarely pleasant company — they are often depicted as rapacious, dangerous carnivores, and are often actively malevolent or alien beings. They also tend to be associated with shadows: often, they cast human shadows instead of their own and only begin to cast a peryton-shaped shadow after they kill a human being.

Unlike many other fantasy creatures, perytons do not have any true mythological roots. Rather, they originate from Jorge Luis Borges' 1957 Book of Imaginary Beings, where the author purports to have learned about them in a (fictitious) long-lost medieval document. Over time, perytons percolated into broader popular culture to join more ancient myths in Western civilization's roster of fantastic beasts and monsters.

Compare Pegasus, for another cross of birds and ungulates. Contrast The Marvelous Deer. Also see The Jersey Devil, which is often depicted as resembling a peryton.