Literature / A Storm of Swords 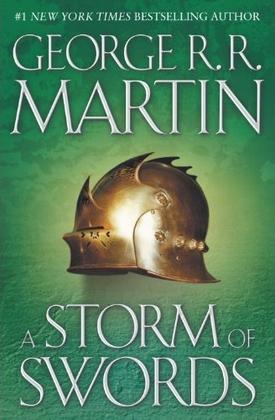 Soon comes the cold, and the night that never ends.
— Melisandre
Advertisement:

The third book in George R. R. Martin's Doorstopper A Song of Ice and Fire fantasy series, released in 2000.

The War of the Five Kings still rages strong upon the land. Stannis Baratheon has been confined to Dragonstone, trying to pick up his pieces after his defeat at Blackwater Bay. With the arrival of Tywin Lannister and the newly forged Lannister-Tyrell alliance, House Lannister's grip upon the Iron Throne grows stronger. The King in The North, Robb Stark, still stands fierce, but has to face the disobedience of his subjects when his mother decides to release the captive Kingslayer in a desperate effort to have her daughters returned. All across the Seven Kingdoms, old grudges begin to rear their ugly heads.

In the east, Daenerys Stormborn finally decides to take things in her own hands and raise an army of her own. To reach Westeros, however, she needs to march on the slave-trading eastern continent. But while men fight among themselves in the South and East, savage wildlings gather under the banner of the King-Beyond-The-Wall to descend upon the Wall. The terrifying creatures known as the Others grow stronger as the nights grow colder, and when the dead walk, walls and stakes and swords mean nothing.

The novel has a total of twelve POV characters. Minor characters Chett and Merett Frey provide the prologue and epilogue respectively. Since the Stark children are completely scattered, they each tell a different tale this time:

A Storm of Swords is currently the longest book in the series. Due to length, the UK paperback edition was split into two parts: Steel and Snow and Blood and Gold. The events of the book are also spread out amongst the third, fourth, and fifth seasons of HBO's Game of Thrones.

A Storm of Tropes: