We Used to Be Friends 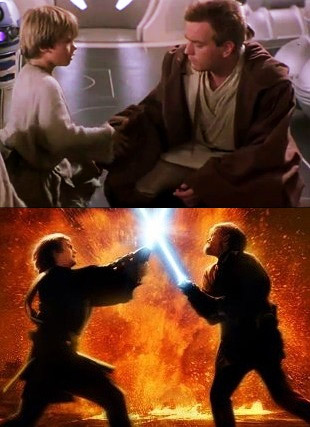 "You were my brother, Anakin... I loved you..."
Captain America: I'm sorry, Tony. But [Bucky's] my friend.
Iron Man: So was I.
— Captain America: Civil War
Advertisement:

Our True Companions, Badass Crew, Five-Man Band — whatever — are pretty close. They share a tight relationship, trust and protect each other, would die for each other, if it might be necessary.

Only, what's this? One or several members of The Team make(s) a mistake or the wrong call. Or they just become evil for some reason.

The reasons might vary, but bottom line is, the once tight bond between the character(s) in question and their former friend(s) is severely damaged, if not completely broken. Instead of love and sympathy, at least one of them feels aversion, distrust, and/or disdain for the other(s), if not outright hatred depending on the severity of what the character has done. Whether they start actively fighting each other or simply share a broken bond and avoid each other will vary, but since things sometimes don't work out the way they are supposed to, they don't/can't reconcile by the end of the episode.

In contrast to a member being Put on a Bus (which doesn't necessarily mean these two tropes can't coincide), this trope focuses on the extraction of a character from their usual environment, due to aversion, distrust or a misunderstanding. However, the character is being kept as a part of the story, which is what differs this from simply being Put on a Bus — the extracted character is not being dropped by the writers. This situation might eventually be resolved by things slowly getting back to normal or it doesn't.

If the character in question was idolized by the other prior to the incident, rather than simply being close friends with them, that's a Broken Pedestal, and the two tropes may coexist. Might trigger a Beard of Sorrow, 10-Minute Retirement, Face–Heel Turn, Heel–Face Turn, a degree in badassery or a Despair Event Horizon. The list goes on and on. Can be revealed via Former Friends Photo.

Contrast with Heel–Face Turn. Compare with Achilles in His Tent, Deus Exit Machina, My Greatest Failure, Grey-and-Gray Morality and Jumping Off the Slippery Slope, Evil Former Friend, Breaking the Fellowship, Et Tu, Brute?. See also Cain and Abel, when the former friends in question were either siblings, or were childhood friends who grew up with each other prior to their falling out. See Formerly Friendly Family for more than just siblings that grew to hate each other. For the inversion, see also Fire-Forged Friends: enemies-turned-allies.

Judy says that Stacy B. and her used to be friends, even wearing matching toe rings. Then Stacy B. began hanging out with the cool kids and now makes fun of her and her friends.

Judy says that Stacy B. and her used to be friends, even wearing matching toe rings. Then Stacy B. began hanging out with the cool kids and now makes fun of her and her friends.