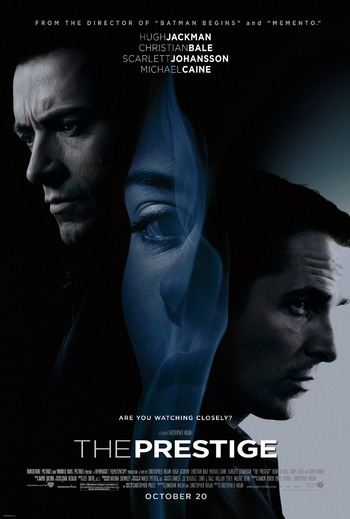 A friendship that became a rivalry.
A rivalry that turned deadly.
"Are you watching closely?"
— Cutter
Advertisement:

The Prestige is a 2006 film from Warner Bros. and Touchstone Pictures, directed by Christopher Nolan and starring Hugh Jackman and Christian Bale. It is based on an award-winning book of the same name by Christopher Priest.

The story follows an escalating rivalry between two late 19th-century magicians, Alfred Borden (Bale) and Robert Angier (Jackman). They started their careers as "voluntaries" to another stage magician until Angier's wife died during a performance, possibly because Borden may have tied a stronger rope knot than necessary (with the wife's permission). The rivalry extends into the magician scene as the two compete to see who is the best at their craft while sabotaging each other's acts.

Using an Anachronic Order, the movie starts with the conclusion of the conflict: Angier drowns during a performance and Borden is incarcerated for murder. Then, through the framing device of the two men reading one another's journals, the movie goes back and forth throughout the story and reveals the secrets behind both men and how lives were destroyed by their obsession.

Interestingly, The Prestige cannot really be said to have a central protagonist. Both sides are portrayed neutrally without either being favored by the film's point of view. This gives a different slant on a story instead of just the normal protagonist-versus-antagonist story. Instead we get a story about the conflict between two obsessed, flawed men.

Also, this film has Nikola Tesla played by David Bowie.

Now has a character sheet in need of expansion.

This film is built almost entirely out of unexpected twists. You will learn them if you read any further.