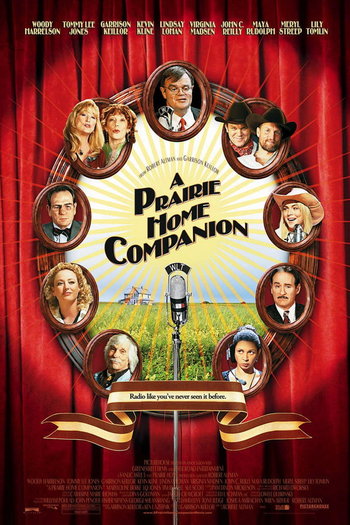 A Prairie Home Companion is Robert Altman's last film, released in 2006. Loosely adapted from Garrison Keillor's radio variety show of the same name,note  Although familiarity with the radio show isn't necessary to follow the film, the characters of Guy Noir, Dusty and Lefty, and the Johnson Sisters, as well as the parody ads for such products as Beebop-a-Ree-Bop Rhubarb Pie and Powdermilk Biscuits, were fixtures of APHC for decades. it stars an Ensemble Cast and Garrison Keillor As Himself.

Long-running radio variety show A Prairie Home Companion, hosted by Garrison "G.K." Keillor, is performed live at the Fitzgerald Theater in Saint Paul, Minnesota; however, the station's parent company has sold the Fitzgerald to developers to demolish and replace with a car park, and they have sent "The Axeman" (Tommy Lee Jones) to determine whether to save or cancel the show.

Tropes from the movie: