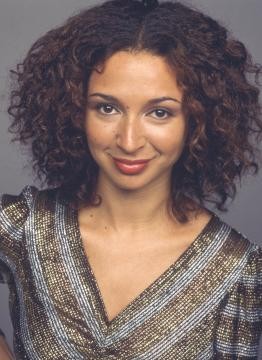 Maya Khabira Rudolph (born July 27, 1972 in Gainesville, Florida) is an American actress and comedian best known for her many roles on Saturday Night Live. Her mother, Minnie Riperton, was a soul singer (the same one known for the song "Loving You"), and her father, Richard Rudolph, was a music producer, so Maya practically grew up in the studio. Her godmother is rhythm-and-blues singer Teena Marie. Her mother died of breast cancer when Maya was very young.

In the 1990s, Maya was the backing singer and occasional keyboardist for rock band The Rentals, appeared in a few films and TV shows, such as As Good as It Gets and Gattaca, and was a member of Improv comedy troupe The Groundlings.

Maya Rudolph's big break came in 2000, when she joined Saturday Night Live, becoming the first half-black, half-white cast member, the fourth black female cast member (after Yvonne Hudson from season six, Danitra Vance from season eleven, and Ellen Cleghorne from season 17), and the first black female cast member to actually be popular (Hudson was a background player who faded to obscurity, Vance was a decent performer but was often relegated to stereotypical roles, and Ellen Cleghorne did attain some popularity on SNL, but she was overshadowed by the male cast membersnote and some of the white female cast members, like Melanie Hutsell and Julia Sweeney and has not done anything of note after her tenure on the show). From 2000 to 2007, she did many celebrity impressions (most famously Donatella "GETHOOOOOOOOOOUT" Versace), played original characters, and even sang. Her Ambiguously Brown appearance and vocal talents made her a chameleon, as she played real and fictional characters of every race and ethnicity — and sometimes, she even played men (such as Scott Joplin and Lorne Michaels). She even won an Emmy Award for her portrayal of Kamala Harris during the Democratic primaries for the 2020 election, which she would continue doing on an official recurring basis after the eventual nominee, Joe Biden, selected her as his running mate.

Rudolph was planning on leaving the show after the 32nd season (2006-2007), but stayed on without a contract for the 33rd season (2007-2008). Unfortunately, it was only for the first four episodes. When Saturday Night Live was put on hiatus due to the 2007-2008 Writers Guild of America strike, Rudolph quietly left the show and was replaced with Casey Wilson when the strike ended and production continued. Rudolph did come back to cameo a few episodes and even host (season 37; February 18, 2012; musical guest: Sleigh Bells), becoming one in a handful of former female cast members to come back and host (joining Julia Louis-Dreyfus, Amy Poehler, Tina Fey, Molly Shannon, and, later, Rudolph's Bridesmaids co-star, Kristen Wiig).

Outside SNL, Rudolph has appeared in several movies and TV shows, such as Bridesmaids, where she was joined by fellow SNL comedian Kristen Wiig. In 2011, she began starring alongside Christina Applegate and Will Arnett in the sitcom Up All Night. She lives with film director Paul Thomas Anderson and their four children.