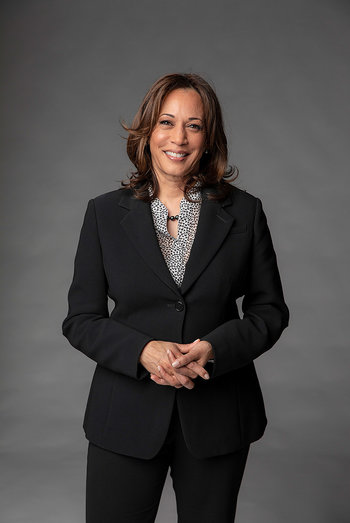 "I say to you my friends, these are not ordinary times. […] But this is our America."
Advertisement:

Kamala Devi Harris (born October 20, 1964)note She was registered at birth as "Kamala Iyer Harris", but it was corrected two weeks later. is an American politician and attorney who is the current Vice President of the United States. Harris is the first female U.S. Vice President and the highest-ranking female elected official in U.S. history, and being of both Afro-Jamaican and Indian ancestry, the first African American and the first Asian American to hold the post.note Some media reports went as far as call her the first biracial and/or person of color to be elected vice president, but that title actually goes to Charles Curtis, Vice President from 1929 to 1933, who was not quite half Native American and identified heavily with his Native ancestry; he was an enrolled member of the Kaw Nation and grew up on a reservation in Kansas. He is little remembered, in part because he had the dubious honor of being Veep to Herbert Hoover and in part because his assimilationist vision for the future of Native people was thoroughly rejected by later generations. She is married to Doug Emhoff, making him the nation's first Second Gentleman, and has two step-children.

Born in Oakland, California, Harris graduated from Howard University and the University of California, Hastings College of the Law. She was recruited to the San Francisco District Attorney's Office, and in 2003, she was elected District Attorney of San Francisco. She was elected Attorney General of California in 2010 and re-elected in 2014. Harris won the 2016 Senate election in California to become the second African American woman (after Carol Moseley Braun) and the first South Asian American to serve in the United States Senate. As a senator, she gained a national profile for her pointed questioning of Trump administration officials during Senate hearings.

Harris ran for the 2020 Democratic presidential nomination, but withdrew from the race prior to the primaries. However, eventual primary winner Biden selected Harris as his running mate on August 2020, and their ticket went on to win the general election in November.

Books she has written

Colin Jost doesn't even have time to sip his coffee before the list of female minority Senators completes.

Colin Jost doesn't even have time to sip his coffee before the list of female minority Senators completes.