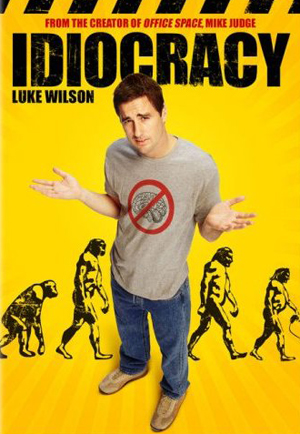 "As Joe and Rita lay dormant, the years passed and mankind became stupider at a frightening rate. Some had high hopes that genetic engineering would correct this trend in evolution, but sadly the greatest minds and resources were focused on conquering hair loss and prolonging erections."
— Narrator
Advertisement:

Idiocracy is a 2006 science fiction comedy by Mike Judge, starring Luke Wilson as Joe Bauers, a totally average soldier who is volunteered for a suspended animation experiment, along with a hooker named Rita (played by Maya Rudolph), who refers to herself as a painter and refers to her pimp, Upgrayedd, as her "boyfriend/manager". The experiment is supposed to run for only a year, but they wind up forgotten for five hundred years. When they finally emerge, they discover that due to 500 years of the dumb outbreeding the intelligent and world culture gradually dumbing down to the Lowest Common Denominator, society has become ridiculously crude and dim-witted. Joe and Rita are now by far the smartest people around, and the world's looking at them to solve some serious problems.

The film wasn't granted a wide theatrical release, and as such did not do well in theaters. Since its DVD release, however, the film has become a Cult Classic.

Joe must be guilty. After all, that's what the other lawyer said.

Joe must be guilty. After all, that's what the other lawyer said.