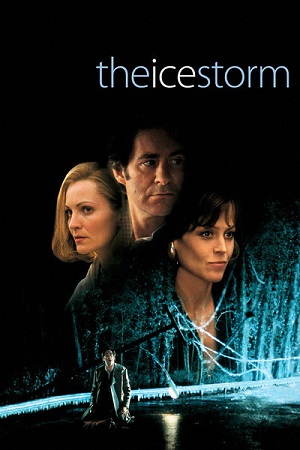 The Ice Storm is a 1997 drama directed by Ang Lee and starring Kevin Kline, Joan Allen, Sigourney Weaver, Tobey Maguire, Christina Ricci, Elijah Wood, and Katie Holmes. The film is an adaptation of the 1994 novel of the same name by Rick Moody.

The film is set in the wealthy suburb of New Canaan, Connecticut, during Thanksgiving week (late November) of 1973, and chronicles the interactions and stresses between two dysfunctional families. In the days leading up to Thanksgiving, the adults seek escapism through alcohol, infidelity, and swingers parties, while the teenage children experiment with drugs and sex.

In the film, Ben Hood (Kline) is dissatisfied with his job in New York City and is cheating on his wife Elena (Allen) with their neighbor Janey Carver (Weaver), who is herself bored with her marriage to Jim, who is frequently out of town on business trips. Elena has also grown bored with her marriage to Ben and is looking for new experiences. The Hoods and the Carvers each have two adolescent children. The Hoods have 16-year-old Paul (Maguire) and 14-year old Wendy (Ricci), while the Carvers have Mikey (Wood) and his younger brother Sandy. Paul, who attends a boarding school in New York City, is a shy but amiable comic-book nerd who is trying drugs and trying to get into the pants of his pretty classmate Libbets Casey (Holmes). Wendy is politically conscious and starting to experiment sexually with both Mikey and Sandy. Mikey is lonely but willing to play along with Wendy's sexual games. Sandy is also attracted to Wendy, and likes to blow things up with firecrackers. Shortly after the holiday, the titular ice storm hits the region and brings a lot of the characters' issues to a climax.