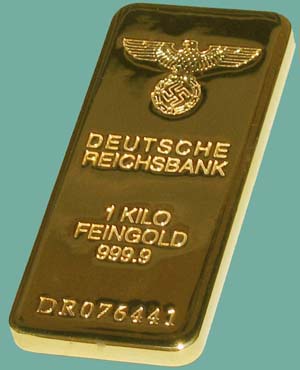 Once the biter, now the bitten.
"We'll all be rich, rich as Nazis!"
— Private Burns, The Simpsons, "Raging Abe Simpson and His Grumbling Grandson in 'The Curse of the Flying Hellfish'"
Advertisement:

Nobody likes Those Wacky Nazis, but everybody likes gold!

During the course of World War II, the Nazis found themselves in possession of a large amount of gold taken/stolen from subjugated peoples, such as their jewelry, any decorations, or sometimes literally from their mouths. Due to the economic situation in Germany just before the war, few other nations were inclined to have faith in their IOUs. So, Germany made many of its large purchases with quantities of gold, transferred to many nations and sometimes in U-boats for secrecy.

Unsurprisingly, this has excited a lot of people. Like pirates, Nazi Germany is imagined to have secreted large amounts of gold in hidden places, ripe for the avid adventurer to discover. If you find Nazi Gold, it's unequivocally yours — like finding spare change between couch cushions. At the very least, if you find this gold and hand it over to the proper authorities, you'll be undercutting any of Those Wacky Nazis remnants from using it to finance any trouble.

Aside from gold, the lost Nazi treasure might also include other valuables pilfered by the Nazis, such as jewelry and priceless works of art.

Half-Truth in Television. While discoveries are not unheard of, finders does not mean keepers. The gold still has legal owners somewhere (and considering how the Nazis got some of those valuables, you'd probably be considered one of the ultimate dicks in the universe for not returning it to its pre-Nazi owners or their descendants). On the other hand, there is the possibility that the owners might give you a small reward for doing so (this is rare, but hardly unheard-of, particularly if you went to particular trouble to get it). In the cases of the above-pictured Reichsbank gold bars, however, it would be impossible to ever determine who it originally belonged to before the Nazis stole it and melted it down.note And not all Reichsbank gold bars were made from stolen gold; Germany did already have gold reserves before the Nazis started invading the rest of Europe.

A specific sub-trope of Nazi Gold, popular in central and eastern Europe, involves the Amber Room

, which was evacuated from Königsberg (now Kaliningrad) and never seen since. It's generally accepted that it was accidentally destroyed when General Rokossovsky's Third Ukrainian Front ground its way through the area in the monumentally bloody East Prussian Campaign of January-April 1945, but the chaotic nature of those times makes it nearly impossible to find conclusive proof of what happened. On a more positive note, Germany and Russia worked together to recreate this room, finishing decades of work in 2003.