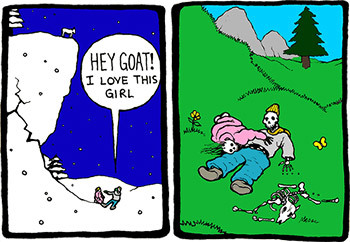 "One yodel out of place would attract, not the jolly echo of a lonely goatherd, but fifty tons of express-delivery snow."
— Reaper Man
Advertisement:

Someone in the mountains triggers an avalanche by shouting or making another loud noise (shooting a gun, detonating an explosion, sneezing), especially if other characters have warned him about this before.

Note that, contrary to popular myth, this does not happen in Real Life - the pressure caused by even very loud sounds is far too small to cause an avalanche.

Subtrope of The Last Straw.

Chiko wasn't in the best place to yell at Krash. Although not everyone seems to be complaining.

Chiko wasn't in the best place to yell at Krash. Although not everyone seems to be complaining.