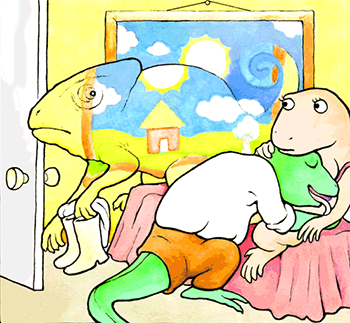 Move Along, Nothing to See Here...
"Perhaps the greatest deception that the spy lizard chameleon has ever achieved is deceiving humans into thinking that they change colors in order to blend in with their surroundings. They do not. They change color based on temperature and their mood. The only surrounding this could help them blend into would be a sad clown convention."
— zefrank1, True Facts About The Chameleon
Advertisement:

In Real Life, chameleons have only a limited colour-changing ability which is primarily dictated by the lizard's mood. Aside from a few species, any usefulness as camouflage is entirely unintended. The colours they change into (shades of green, brown, and grey, with bolder psychedelic patterns usually reserved only for courtship or frightening rivals and predators), just happen to be the same as their surroundings most of the time.note Of course, the reason they turn these colors and not, say, bright pink or blue is that they're far more likely to be useful as camouflage.

Fictional chameleons, of course, can seamlessly will their skin into an exact reproduction of wherever they're standing. One could argue that a sapient chameleon may be able to consciously change colour to match their surroundings whereas their real-life counterparts only act out of instinct, but this doesn't excuse the more fantastical versions of this trope that become straight-up invisible or even change shape.

The most common way of playing this trope for laughs is for a chameleon capable of speech to face a situation where it must match a plaid background. It will invariably be unable to do so, and won't be shy about saying so.

As a side note, the most well-known animal that is actually capable of camouflaging to match their surroundings is the octopus. Meanwhile, the camouflage thing isn't the only behavior which has been falsely attributed to chameleons; in the Middle Ages and Renaissance, it was popularly believed that these lizards lived by eating nothing except air. The title character of Shakespeare's Hamlet references this, claiming to do the same thing himself (during his period of feigning madness).

Subtrope of Somewhere, a Herpetologist Is Crying and Chameleon Camouflage. Compare Invisibility Cloak. Can often overlap with Lovable Lizard.