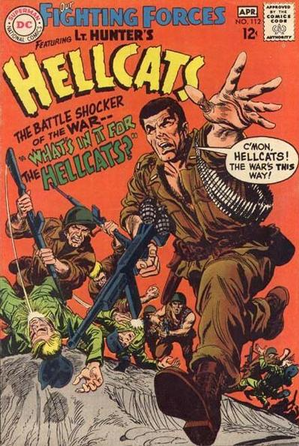 Hunter's Hellcats is a feature that ran in Our Fighting Forces #106 to #123 from DC Comics.

At the outbreak of WWII, homicide detective Ben Hunter was drafted and sent overseas. Promoted to Lieutenant, he was asked to oversee a special commando force comprised entirely of criminals culled from the Army stockade. These hardcases at first refused his authority until his fists earned their respect. Hunter's efforts galvanized the men, turning them into a hard fighting team that always returned unscathed from their missions to both the European and Pacific Theaters of Operation.

Hunter himself survived the war and was promoted to Colonel, and has made occasional later appearances in The DCU. He was eventually turned into a Cyborg and became leader of the Creature Commandos.