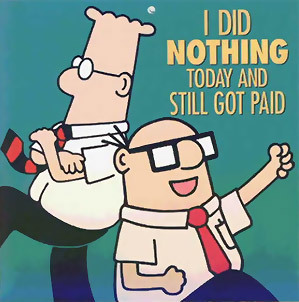 Dilbert: Lately, every person I deal with seems to disappoint me. Every meeting starts late, every answer is misleading, every deadline is ignored and all work is shoddily done. I guess what I'm saying is that today I need some empathy.
Dogbert: You are totally blocking my view of the wall.
Advertisement:

Scott Adams' newspaper comic about Dilbert, a software engineer in a soulless and bureaucratic corporate machine. The strip is principally a Satire of the corporate world.

It wasn't always, though. Originally, the comic focused mostly on Dilbert's personal life, with his workplace being an incidental setting. However, Adams worked at a similar high-tech company at the time and his spot-on jabs at the culture made the office-themed strips the most popular. After realizing this, Adams gradually reworked the comic to focus almost entirely on Dilbert's workplace. In the process, the other employees at the company became more prominent characters while prior supporting characters became The Artifact and were Demoted To Extras unless they could integrate themselves into the workplace setting.

Although the strip's portrayal of corporate life is very far on the cynical end of the Sliding Scale of Idealism Versus Cynicism, it accomplishes its satire with absurdist humor, including the presence of Funny Animals, Little Green Men, supernatural creatures and Odd Job Gods.

Was also made into a short-lived, but critically acclaimed animated show, and a board game.