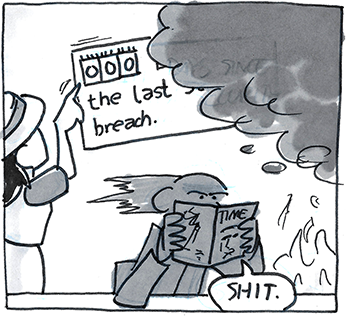 A trope usually seen in comedy. Occurs where an institution holds a sign outside their facility stating "X days since the last [bad event]", usually a sign like this is used to indicate the building has No OSHA Compliance, with work-related accidents or outlandish catastrophes being the most frequent bad event. Sometimes being reset by occurrences within the episode. An increasingly common variant is the sign having to be reset as it is being updated. These signs still exist in real life, even as fiction relentlessly parodies them.