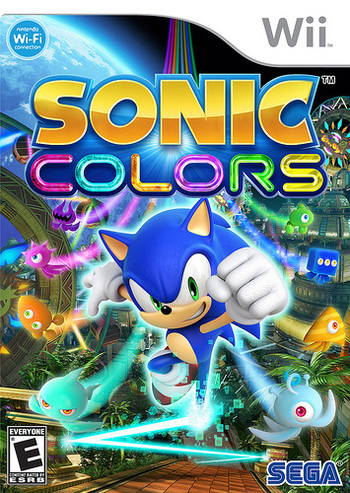 Welcome to Eggman’s Incredible Interstellar Amusement Park! Where you can enjoy five planets for the price of one!
Dr. Eggman: This amusement park was constructed entirely out of a sense of remorse for my past transgressions, and is in no way associated with any sort of evil plot or premeditated misdeeds.
Sonic: Well, that's a relief.
Advertisement:

Released in late 2010, Sonic Colors is a main series installment of the Sonic the Hedgehog franchise, exclusive to Nintendo's Wii and DS platforms. Though the Wii and DS versions have slightly different stories to each other, the general premise of the game is the same.

After apparently developing some remorse for his past indiscretions, Dr. Eggman supposedly turns a new leaf and builds an intergalactic amusement park up in space, made up of several planet-sized attractions. However, the amusement park is actually an assembly of planets that Eggman has pulled together, so that he might be able to capture the alien inhabitants here, known as Wisps, and harness their colored energy for his latest nefarious experiments. A Wisp named Yacker informs Sonic who, accompanied by Tails, embarks on a journey through the many attractions of Dr. Eggman's amusement park to free the imprisoned Wisps inhabiting each planet and thwart the doctor's Evil Plans.

Much like Sonic the Hedgehog 4, this is one of Sega's answers to the fanbase's pleas for a better Sonic game. While Sonic 4 focuses on the classical gameplay aspects, Colors focuses on the constant speed that had become a staple of the Dimps-developed 2D Sonic games. The Wii version's stages are reminiscent of Sonic Unleashed's daytime stages (behind-the-back high-speed 3D sections combined with classic 2D — or "2½D" — platforming segments, though with a higher concentration of 2D sections), whereas the DS version is essentially Sonic Rush 3 under a different name (and, like that series, was developed by Dimps). In both versions, Sonic undertakes the high-speed platforming action he's well-known for. He can also harness the energy of the Wisps himself to activate special powers and clear new paths through the stages (though this gimmick is surprisingly not as prominent as one would expect from a Sonic game).

Sonic Colors' script was written by Yasushi Otake, with the localization being led by Ken Pontac and Warren Graff, writers Happy Tree Friends and MadWorld. The duo would become a mainstay in the series until 2017.

On May 27, 2021, an Updated Re-release of the Wii version of the game was announced for Nintendo Switch, PlayStation 4, PC (via the Epic Games Store) and Xbox One called Sonic Colors Ultimate with an updated and re-recorded soundtrack. Developed by Blind Squirrel Games, it was released on September 7 of the same year. In addition, a fully-voiced two-part cartoon, Sonic Colors: Rise of the Wisps, is accompanying the release of the game. You can see the animated short here.

Help yourself to the complimentary tropes found in this game!note And by "complimentary", we mean "quite expensive".

Example of:
Does This Remind You of Anything?