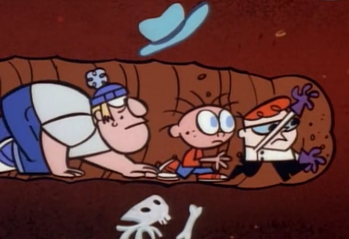 When tunnels need to be dug in fiction (particularly by the Tunnel King), they're usually dug very quickly. Ridiculously quickly. At rates that are flatly not possible, often in the range of several metres per second, without use of explosives or specialized boring machines. By way of reference, the fastest boring machine in history can only manage 4.5 metres per hour, with an experienced crew to run it, and to run all of the support systems, like removing waste rock and lining the tunnel behind the machine, which are very often ignored in fictional tunnelling.

When you get down to thinking about it, there is a lot of Artistic License – Physics involved when this happens in fiction. See, dirt's natural state is not to form a stable roof above. Like water, it seeks the lowest point. Gravity Is a Harsh Mistress here, as a tunnel ceiling that looks stable may collapse at any old time. True, rabbits, insects and other burrowing creatures make these nice, neat little tunnels, but those are much smaller creatures than humans and they have evolved to dig quickly and safely.note At least we think so. We have no idea how many rabbits die in natural cave-ins we will never know about. And then there's the fact that the soil and/or stone that the tunnel displaces has to go somewhere. Having the creature eat their way through the earth doesn't help either, since a stomach will only hold as much material as will fit inside it.

Note that this trope only applies to characters digging far faster than their abilities and equipment should allow. Rock-shapers, earthbenders, Superman and similar characters do not generally fall under this trope. Expect a Wormsign to show up near the surface.

Compare Dishing Out Dirt. May be possible with a Drill Tank. See also Dig Attack when this is used offensively.