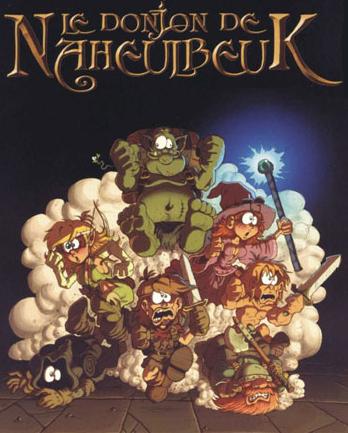 Le Donjon de Naheulbeuk ("The Dungeon of Naheulbeuk") is a French audio series which started in 2001, available for free on the Internet

, as well as various materials related to its universe. It was created by John Lang, under the nickname of Pen of Chaos (shortened to POC).

An Affectionate Parody of tabletop RPGs, it tells the "amazing" story of a group of stereotypical roleplaying characters, who are trying to storm the aforementioned dungeon in the search of a magic artifact. It turns out, however, that they're all less than competent. And that they hate each other. A lot.

The series' notoriety has grown in French-speaking countries over the years, and gave birth to a wide internet community. Over time, it evolved into a franchise now spanning several media: