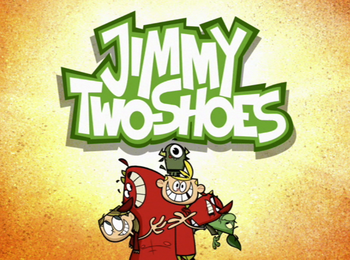 Jimmy Two-Shoes (called Jimmy Cool or Jimmy Jimmy in some regions) is a Canadian animated series produced by Breakthrough Entertainment (previously known for Atomic Betty and Captain Flamingo) for Teletoon and Jetix Europe (later Disney XD). The series was created by writer Edward Kay and animator Sean Scott, with The Raccoons creator Kevin Gillis serving as producer, and aired from 2009 to 2011 for 52 episodes.

The show centers around the miscellaneous adventures of the eponymous Jimmy Two-Shoes, a perpetually happy and optimistic boy who resides in Miseryville, a miserable town populated by monsters and demons. Being the good-natured person he is, Jimmy aspires to bring joy and happiness to the town's residents, much to the dismay of Lucius Heinous VII, the tiny CEO of local Misery Inc, which manufactures products designed to keep the denizens of the town miserable. Joining along on Jimmy's misadventures are his two best friends, Lucius' not-so-evil, not-so-intelligent son Beezy and Heloise, Lucius' sadistic top inventor who harbors a crush on Jimmy. Rounding out the cast are Lucius' beleaguered Yes-Man Samy, Jimmy's pet dog monster Cerbee, Drill Sergeant Nasty Molotov, Beezy's wild girlfriend Saffi, and Lucius' Rich Bitch fianceé Jez.

Jimmy Two-Shoes lasted two seasons, with the second season having the show undergo a tonal Retool that pushed the show even further away from its initial Black Comedy originsnote (see the Trivia page for more information on that) to be even wackier, in addition to a production switch from Toon Boom to Adobe Flash. Despite announcements that it was renewed for a third season in 2011, these additional episodes never materialized, with most fans placing the blame for the cancellation on mixed response to the final season. Nevertheless, it retains a devoted, if small, fanbase.

The complete series was released on DVD in 2013

and won the Award of Excellence for Best Television Program Animation

from the Youth Media Alliance that same year. You can also catch every episode on YouTube here

Heloise chases Jimmy after he ruins the invention she just finished. She ends up bumping into and locking lips with Beezy, much to their disgust.

Heloise chases Jimmy after he ruins the invention she just finished. She ends up bumping into and locking lips with Beezy, much to their disgust.