The Farmer and the Viper 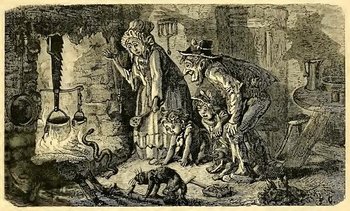 Perhaps they want a pet snake?note  An illustration of La Fontaine's fable by Ernest Griset
"One winter a Farmer found a Viper frozen and numb with cold, and out of pity picked it up and placed it in his bosom. The Viper was no sooner revived by the warmth than it turned upon its benefactor and inflicted a fatal bite upon him; and as the poor man lay dying, he cried, 'I have only got what I deserved, for taking compassion on so villainous a creature.'"
— Aesop's Fables, "The Farmer and the Viper"

Kindness is thrown away upon evil.

This Hard Truth Aesop is much like Curiosity Is a Crapshoot: a display of friendship, trust, and love won't always bring about redemption; sometimes a bad person is simply bad, and they won't stop being that way just because you were kind to them — in fact, they may very well betray you in any number of fashions, repaying the good turn you've done for them with evil. It's in the nature of a snake to bite, after all.

Correctly discerning the irredeemable from the redeemable is tricky, of course, and expect characters to argue over whether this trope even applies. After all, in Real Life, this belief is used to justify ignoring people in need, especially if they have ever done anything vaguely "bad". In fact, characters believing in this trope too passionately often creates unsympathetic to outright villainous characters - anything from uncaring zealots to psychotic serial murderers who believe they are purging society of its permanently corrupted evil dregs since there is no hope for redemption for them.

Compare Morality Chain, where the Samaritan does somehow manage to restrain their ward's wickedness. Turn the Other Cheek is probably the Samaritan's mindset. The receiver may turn out to be Always Chaotic Evil, a Bitch in Sheep's Clothing, or a Jerk with a Heart of Jerk. When combined with Save the Villain, this is sometimes used to set up a Disney Villain Death. Compare Bad Samaritan, when it is the caregiver, not the care-receiver, who is evil. Also compare Complaining About Rescues They Don't Like. Plays with the traditional belief of Sacred Hospitality. If such an act makes a character give up on redeeming the villain, it's Beyond Redemption.

Inverse of Good Samaritan and Androcles' Lion. See also Befriending the Enemy, Naïve Animal Lover, Save the Villain, Taking You with Me, Take My Hand!, Prisoner's Dilemma, Ungrateful Bastard, Chronic Backstabbing Disorder, Horrible Judge of Character. Compare Pacifism Backfire (while this is "Hospitality Backfire") and the False Innocence Trick where a captured villain pretends to be harmless. See also They Were Holding You Back for a common justification for how the viper is really "helping."

Also called the "Scorpion Dilemma" or "The Scorpion and The Frog" after a similar fable (popularized in Orson Welles' Mr. Arkadin), this story contains the additional Aesop that a poisonous creature can't help but give in to its nature, even when doing so will lead directly to its own death. See also Orc Raised by Elves.

(Also, at risk of pointing out the obvious, but don't take Aesop's Fables as a good guide to real-life snakes, who do not run around envenomating people out of a general desire to do evil. Venom is precious and expensive, so real snakes save it for if they think they're really under threat.)

open/close all folders
Fairy Tales
Films — Animated
Films — Live-Action
Literature
Live-Action TV
Lionel: "Why did you do it?" the dying frog asked him. And the scorpion replied, "Because it is my nature."
Music
Myths & Religion
Professional Wrestling
Radio
Tabletop Games
Webcomics
Web Original
Western Animation

Alternative Title(s): Scorpion Dilemma, Frog And The Scorpion, The Scorpion And The Frog, Farmer And The Viper