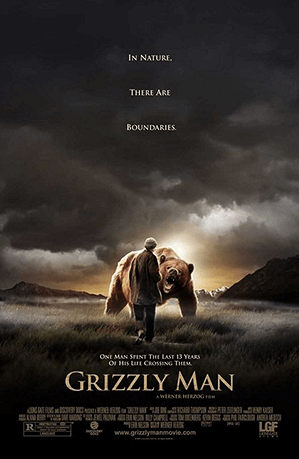 Grizzly Man is a 2005 American documentary film by German director Werner Herzog and featuring a musical score from Richard Thompson.

It chronicles the life and death of bear enthusiast, wildlife activist, and aspiring documentarian Timothy Treadwell.

Treadwell, a self-taught bear researcher, spent thirteen summers of his life in Alaska's Katmai National Park, in close proximity to grizzly bears. Treadwell's habit of living amongst grizzly bears without taking any safety precautions bemused both professional bear researchers and Alaskan locals, but also made him a minor celebrity. Things ended horribly, however, when Treadwell's last trip among the bears ended with him and his girlfriend Amie Huguenard being eaten.

For Grizzly Man, Herzog used sequences extracted from more than 85 hours of video footage shot by Treadwell during the last five years of his life, and conducted interviews with Treadwell's family and friends, as well as bear and nature experts. Herzog also narrates, and offers his own interpretations of the events. In his narration, he depicts Treadwell as a disturbed man who may have had a death wish toward the end of his life, but also refuses to condemn him for this.