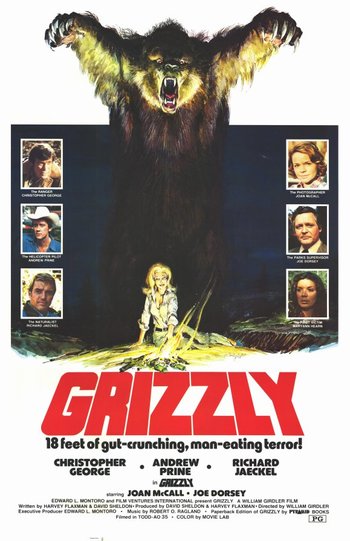 A horror movie that’s just unbearable.
The most dangerous jaws on land.
Advertisement:

Grizzly is a Cult Classic independent "Nature Strikes Back" film from the 1970s by William Girdler (Day of the Animals, Manitou). Notable for ripping off Steven Spielberg's Jaws at every possible opportunity, and still managing to be some fun in its own right. In this film, a national park finds itself terrorized by a massive bear.

It's also notable a sequel was attempted in the '80s that was never finished or released, and which seemingly would never see the light of day. That is, until a very rough work print (without the bear footage, save for some scenes at the end featuring an animatronic) was thrown on the internet during the Charlie Sheen craze in 2011, due to the film being one of the earliest roles for Sheen (as well as George Clooney and Laura Dern, believe it or not). Fan-Edits can be found around the net which often include bear footage to fill in the gaps.

Then, in 2020, the film, titled Grizzly II: Revenge, was finally completed

through the efforts of producer Suzanne Nagy, editors and some stock bear footage, trimmed down from the leaked edit's running time to just 75 minutes. The film made its premiere at L.A. Live and was slated to run in film festivals, but those plans were scuttled by the COVID-19 Pandemic. The film finally arrived digitally and in select theaters on January 8, 2021.

Not to be confused with Grizzly, another killer bear film released in 2015 starring Billy Bob Thornton, James Marsden and Thomas Jane and known as Red Machine in other areas outside the US. Also not to be confused with the documentary Grizzly Man, or the Inuit lacrosse sports drama film The Grizzlies.

It was given the RiffTrax treatment in 2017.

Tropes present in Grizzly include...