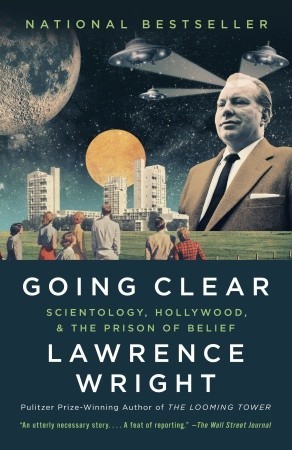 "A civilization without insanity, without criminals and without war, where the able can prosper and honest beings have rights, and where man is free to rise to greater heights, are the aims of Scientology."
—L. Ron Hubbard
Advertisement:

Going Clear: Scientology, Hollywood, and the Prison of Belief is a 2013 book by Pulitzer-winning New Yorker journalist Lawrence Wright. The book examines the Church of Scientology, from its inception by L. Ron Hubbard in The '50s to its present leadership under David Miscavige. The book proceeds to condemn Scientology, portraying the organization as an abusive and corrupt micro-dystopia.

This book inspired a much-acclaimed HBO documentary film of the same name by Alex Gibney. Both rely on their often-shocking interviews with ex-Scientologists (including former members of Hubbard and Miscavige's inner circles) who escaped the church's abuses.

open/close all folders
Advertisement:
Both book and film

Both the book and the film contain examples of: