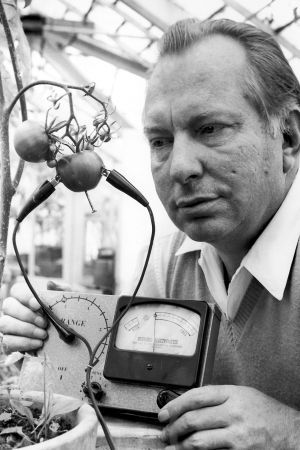 "Writing for a penny a word is ridiculous. If a man really wants to make a million dollars, the best way would be to start his own religion."
Advertisement:

Lafayette Ronald Hubbard (March 13, 1911 — January 24, 1986) was both a sailor and a classic science fiction writer before founding one of the most controversial religious movements of the 20th and 21st centuries.

L. Ron Hubbard was born in 1911 in Tilden, Nebraska. For much of his life, Hubbard as a person was often noted to both be a notorious charmer and a notorious Münchausen. He often told tall, wildly exaggerated tales about his childhood and his service history in the US Navy in World War II. Amongst his most often repeated stories was claiming to have been made an honorary member of the Blackfoot tribe, who lived near his family's home, as a young boy (no actual member of the Blackfoot tribe has ever confirmed this story), and having been in a fierce battle with Japanese submarines during his time as lieutenant junior grade in the United States Naval Reserve (all rapports suggest that he had mistaken a magnetic deposit for an enemy sub and subsequently bombed it with depth charges for 68 hours). Although his stories about his life were fabricated to some degree or other, Hubbard still tended to be quite well-liked in the various social circles he moved in throughout his life, as people tended to find him quite charming and charismatic, and even people who knew that his tales were mostly made up, have admitted that if nothing else, they were entertaining tales and that Hubbard certainly knew how to draw in and keep the attention of an audience.

As a writer, Hubbard was extraordinarily prolific during the '30s and '40s, writing both short stories for pulp magazines and longer work such as Buckskin Brigades and Ole Doc Methuselah. While writing in many genres, he was best known for his science fiction. Opinions of his work are sharply divided, and his later notoriety has rendered it almost impossible to judge his work objectively (although some have tried

). Most critics grant that he had at least some talent, and his novel To The Stars was respected enough to be nominated for a Retro Hugo in 2001. But Hubbard's love for tall tales also comes into play in his writing career. Another of his most frequently repeated stories centered around a dental procedure he had underwent in 1938, where he had reacted to the drug used in the procedure by, in his own words, having a revelatory near-death experience. The incident inspired him to write a script titled Excalibur, the contents of which Hubbard insisted were so utterly terrifying that it would drive most people insane and in a some cases even to suicide if they were to read it. The risks associated with this highly dangerous piece of writing meant that Hubbard could in good conscience of course not release the full manuscript publicly; he kept it in a safe for most of his life and would only very occasionally show a few highly trusted associates some selected snippets of it. For their own safety of course.

Had Hubbard's life continued on this path, he would probably be remembered today as a significant writer of the Golden Age of Science Fiction, though probably not one of "the greats". Instead, he created Dianetics (which he claimed was at least partially based on Excalibur, but not the really dangerous parts of course), a style of therapy based on digging up traumatic memories, including Past-Life Memories, through persistent questioning. Although roundly criticized by the medical and scientific communities, Dianetics found a following. The Hubbard Dianetic Research Foundation, set up to train Dianetic auditors, soon became a multimillion-dollar enterprise, but mismanagement, scandals, and a public backlash caused it to fail in 1952.

Undaunted, Hubbard used Dianetics as the basis for a religious movement called Scientology. Supporters claim that Hubbard's shift from a psychological movement to a religious one was due to "having discovered that man is most fundamentally a spiritual being". Skeptics have suggested that his true motive was to exploit tax breaks and insulate himself from criticism from the scientific community, as well as government regulations (the earlier Dianetics Foundation had been hit with injunctions from the FDA for making unsubstantiated medical claims and practicing medicine without a license). This isn't helped that Hubbard himself has made jokes making light of him founding Scientology, such as the page quote above.

To cut a very, very long story short, Scientology was incredibly successful and secured Hubbard's fortunes for the rest of his life, but controversy has dogged the movement to the present day. Critics have alleged that the church practices fraudulent medicine, financially exploits adherents, and has a cult-like atmosphere. The church in turn has been very public (sometimes criminal) in battles against its critics. Scientology has gathered a massive base of hate, and modern pop culture uses it as a stock punchline, although aside from several high-profile and vocal apostates, members of the church remain devoted.

Due to some of Scientology's more controversial activities, Hubbard ended up being wanted for questioning in multiple legal matters by several authorities in several different countries. Paranoid about this, Hubbard went into hiding in 1972, and would remain underground for much of the rest of his life. During this time, he was surrounded by an entourage of loyal Scientology members, who saw to it that his very need was satisfied and his every directives for the church was carried out. Also during this time, Hubbard tried his hand at making films with himself as producer, writer, and director, but the process quickly frustraded him due to several logistic issues that even his loyal followers couldn't solve and he had problems with communicating his creative vision to his actors, and eventually he gave up on it entirely, one of the few times he had been known to openly admit failure with a personal project.

Near the end of his life, Hubbard returned to his roots as a science fiction author, releasing Battlefield Earth in 1982 and the ten-volume, 4,000-page Space Opera Mission Earth (no relation) over a two-year period starting in 1985. Both were bestsellers, although how much of this is attributable to Scientologists buying multiple copies in a effort to drive the books up the lists is a matter of debate. Battlefield Earth did get some respect from fans of pulp adventure (the movie, not so much), but Mission Earth did not. He also recorded a couple of albums around this period of time as well, mostly soundtracks for his final books. Hubbard died January 24, 1986, three months after the first volume of Mission Earth was published and sometime after his collaborative album was released.

Hubbard currently holds Guinness world records for most books published (1,084) and most languages his books have been translated into (71).

Works by Hubbard with their own trope pages include:

Other works by Hubbard contain examples of: