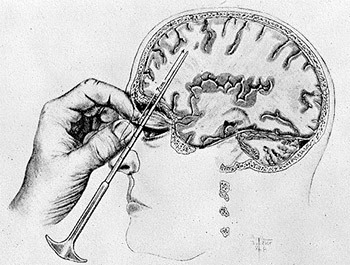 The (il)logical conclusion of Anti-Intellectualism.
(Not pictured: Human rights.)
"You ever heard of a transorbital lobotomy? They sap the patient with electric shock, then go through the eye with an ice pick, pull out some nerve fibres. Makes the patients much more obedient. Tractable. It's barbaric. Unconscionable."
— Shutter Island
Advertisement:

One moment you'll see a character, chirpy, energetic, and arguing with the nurses at a mental hospital. The next day, they're quiet and compliant, drooling, emotionless — in short, Empty Shells. What took place? A lobotomy.

A lobotomy is a (thankfully, now rare) medical operation that cuts into part of a person's brain in order to treat mental illness. Lobotomies and similar drastic brain alterations are still used as last-ditch treatment for intractable epilepsy, but that's about it. In Real Life, there was little evidence that it did anything therapeutic. The most often performed procedure rarely helped; it simply destroyed random brain matter and caused the patient to suffer loss of motivation, loss of assertiveness, loss of creativity, difficulty in social situations and incontinence and could cause seizures in those who had not suffered from them before the operation. A majority of lobotomies were performed on adult women who were perceived as unstable, moody, or violent (by '30s-'60s standards, anyway—take that as you will), but it was sometimes performed on male patients (often as an attempt to Cure Your Gays, for example), and in some cases very young children. For all these reasons, the practice was highly controversial from the outset (to the point where the Soviet Union banned it in 1950) and was gradually phased out when pharmacological treatments for mental illnesses became available in The '50s. It was still noticeably present in mental hospitals until The '80s, but only became rarer and rarer during that time.

This trope includes all instances of messing with human brains and removing brain matter and it refers to any sort of brain-tampering effect that diminishes intellect or willpower. Once seen as a perfectly humane thing to do, now treated in fiction as the standard example of medical science Gone Horribly Wrong, lobotomies in fiction are almost never presented as an actual therapy, but rather as a threat held over people or a means of rendering an inconvenient subject compliant and unable to threaten the one who performs it. Very rarely does it appear as a genuine attempt to treat the patient- not even a lesser of two evils like it was often presented in real life. Dr. Walter Freeman, one of the chief proponents of lobotomy, often shared before-and-after photos of patients depicting the "before" as agitated or disturbed-looking, and the "after" as smiling vacantly, occasionally with a note about a violent patient becoming a "perfect household pet" (with it being unclear if he meant "the darling of the household" or essentially reduced to actual animalistic status!), but fictional proponents rarely provide even that much dubious reassurance. Also, while many real-life lobotomies went in through the eye socket and used a thin, icepick-like tool to punch through a thin layer of bone to get to the brain, in fiction it's far more common for a character to be subjected to the older transcranial lobotomy that involves cutting into the top of the skull—the better to show the damage to the audience via the huge, visible scar and frequently poorly-shaven head that goes along with that—though some stories, like the original book of One Flew Over the Cuckoo's Nest, instead go for the icepick method and show the damage via the victim's black eyes.

See Electroconvulsive Therapy Is Torture for another mental health treatment that is often presented as mind-destroying in fiction. (However, unlike lobotomy, electroconvulsive therapy actually can be beneficial in real life and is regularly consented to by patients for whom other therapies such as medication don't work, while lobotomy is basically never performed anymore.)

Contrast with Laser-Guided Amnesia which is a relatively mild thing in fictionland you can do to inconvenient witnesses. See also Brainwashed, Brainwashed and Crazy, Death of Personality, and Mind Rape.

Mad Scientists and Deadly Doctors are likely to perform it, and the Psycho Psychologist is another deadly figure who may suggest this procedure.

Realizing that a character underwent a Lobotomy might very often come off as a Spoiler Trope. Beware!