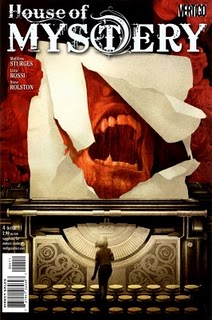 Cress: Come on, Poet. Dazzle us with one of your eloquent theories about why we're stuck here and why little Rina-bean gets to leave this sinkhole instead of me. Men always have theories about everything.
Poet: Indeed I do have a new theory, Cress. It involves magnets, and monkeys wearing top hats and a malevolent cheese grater bent on world domination.
— Issue 1, "The First Drink's On The House."
Advertisement:

Bethany "Fig" Keele is running away from her burning house and the two figures who are chasing her. In her hands are the plans for the house of her dreams — not her dream house, but the house of her literal dreams, the titular House of Mystery. Once she gets there, she not only finds that it's being used as a sort of interdimensional pub house, but that she can't leave as well.

There are other occupants of the House that can't leave, either: Harry, the bartender, Cressida, the melodramatic waitress, Ann Preston, the pirate queen bouncer, and Poet, a Purple Prose spouting poet and short-order cook. A previous occupant, Rina, just left via a mysterious coachman. The patrons of the House of Mystery can come and go as they please (to all their various worlds, magical or otherwise), but they can't even get back out the front gate.

An interesting comic from Vertigo by Lilah Sturges (Jack Of Fables) and Bill Willingham (Fables), based on the original 1951-1983 series, that combines an overall storyarc with an anthology, since all the patrons of the House of Mystery have to pay with stories. Strongly connected to The Sandman. The 2008 series lasted for 42 issues (July, 2008-December, 2011) and two Annuals.

One of the stories, I, Vampire, later became its own comic for New 52.

House of Mystery provides examples of: