Film / Demon of the Lute 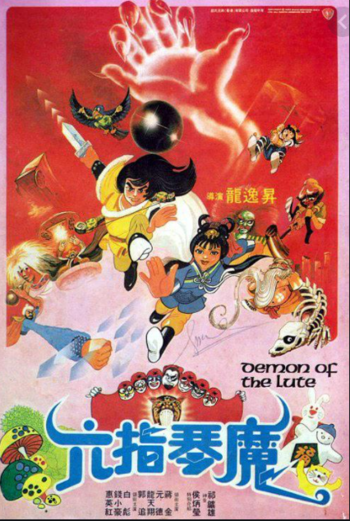 The movie is much sillier than this cartoon-looking poster. Trust us.

"This is a Wuxia movie made for the kids".
The Film's Opening Title.

Demon of the Lute is a 1983 Wuxia fantasy-comedy-parody film directed by Lung Yi-sheng, released by Shaw Brothers during the period in the 80s when the studio has, after spending most of the 60s and 70s making straight, dramatic, and mostly serious wuxia period pieces, decide to try their hands in the sillier fantasy kiddie-stuff.

A powerful artifact known as the Demon Lute (hey, that's the title!) has surfaced in the martial world. Yuan Fei (Chin Siu-ho, better remembered for his later roles in The Seventh Curse and Tai Chi Master), a young warrior who recently completed training, decide to prove himself a worthy hero by seeking the only weapons that can destroy the demon. Along the way, he bumps into a colourful cast of characters, including a Red Haired Warlord armed with a massive battleax, a swordswoman named Feng Ling (Kara Wai) who knows the secret of destroying said lute, a sniveling henchman of the devil with a scrotum-like head (and this is a kid's film...), a corrupt martial arts master with extendable fists who wants the lute for himself, and an old woodcutter and his son, Doraemon (YES, really) who tags along with Yuan Fei for his quest.

"The Demon is Released! Unleash the Tropes!"