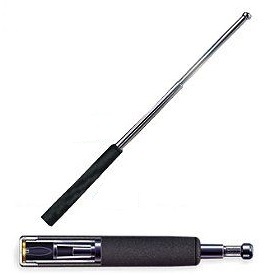 So you have a rather long weapon, and you don't have the Bag of Holding or any sort of Hammerspace to store and conceal it. What to do? Make it retractable, thus concealing it and possibly making it small enough to be stored without any problems.

In the 21st century, this trope has had decent overlap with the Carry a Big Stick and Lawman Baton tropes, thanks to the invention of the expandable baton (also known as collapsible, telescopic, extendable, tactical and spring cosh baton). Although it's not exactly exclusive to law-enforcement or security detail, as these can also be seen in the hands of civilians for self-defense, or even criminals!

Sub-Trope of Impossibly Compact Folding. Typically, any type of Blade Below the Shoulder, Laser Blade, Sinister Switchblade, Telescoping Staff, or Pile Bunker is this trope. Compare Shapeshifter Weapon, where a character that can shapeshift can create many weapons from their body, Morph Weapon which is a weapon that can take different forms and Person of Holding. See also Idiosyncratic Mecha Storage, IKEA Weaponry, Fuuma Shuriken, Bifurcated Weapon Sleep-Mode Size, and Wolverine Claws. Contrast with Collapsible Helmet.