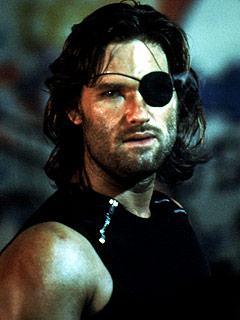 One-eyed Snake.
"You can't spell 'warrior' without one 'I'."
— RiffTrax on Star Trek VI
Advertisement:

Something covers one of the character's eyes. It might be an eyepatch, a particularly concealing haircut, or a tilted hachimaki. Whatever it is, and however it came to be, through Fashionable Asymmetry it neatly conveys the fact that the wearer is either 1) an experienced combatant or 2) secretly a badass.

These characters rarely experience any problems with depth perception or suffer from the resulting reduced field of vision. In fact, sometimes the Eyepatch of Power covers a perfectly functional—or specially functional—eye instead of the empty hole one might suspect. This is sometimes a technique of The Trickster. Main characters will often gain an eyepatch as a Future Badass or Evil Twin.

Pirates often have eye patches as a Stock Costume Trait, which is a separate thematic concept—see Dressed to Plunder—but the overlap of badassery and piracy is significant enough to mention. This is partially Truth in Television, pirates in real life did often wear eye patches regularly, but mainly because on sailing ships in the 18th century there were over a thousand different ways one could lose body parts, including eyes (this is also the reason why hooks for hands and peg legs are commonly associated with them as well, seeing as such items could easily be improvised using materials already on a ship to compensate for missing limbs). In this case, sailors didn't wear eye patches to look tough so much as they did because on average people have an easier time looking at a piece of cloth over one eye than at the scarred tissue where the eye used to be. Furthermore, even pirates (and other seamen) with two functioning eyes were wont to wear eyepatches: since it's so dark belowdecks, having one eye always in darkness made it easier to adjust.

In The Future, rough and tumble outlaws will often have a single, obvious cybernetic eye which will give them some sort of special holdout ability or Super Senses.

When the Norse god Odin traded an eye for a drink from Mimir's well of knowledge, he made this trope Older Than Print.

Related to Blind Seer—power gain through the loss of an eye is a repeating motif in literature, like the Odin example above.

See also: Magical Eye, Mask Power, Eyes Always Shut, and if you're masochistic, Eye Scream. For characters that weren't wearing it the last time you saw them, see Eyepatch After Time Skip. See also Blindfolded Vision, where a blindfolded combatant is no worse off (or better!) than their opponents. May result because Scars Are Forever.