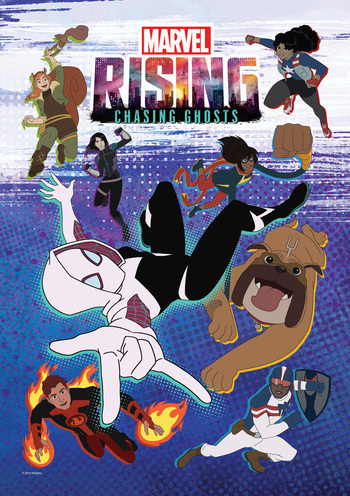 Marvel Rising: Chasing Ghosts is a 22-minute animated special and the fourth installment in the Marvel Rising franchise. The special debuted January 16, 2019 on the Marvel HQ Youtube channel and serves as a sequel to the Initiation shorts.

Following the events of Initiation and Secret Warriors, Ghost-Spider still seeks to clear her name and avenge her friend's death. As she gets closer to finding Sheath, who committed the deed, she finds herself crossing paths with the Secret Warriors, who are also after the Inhuman criminal. In order to bring her to justice, Gwen must reluctantly join forces with the team, while Daisy Johnson tries to convince her to be a permanent member.

It is followed by Marvel Rising: Heart of Iron.