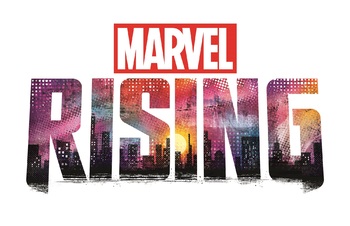 Marvel Rising is a Marvel Comics cross-platform franchise headed by writer Mairghread Scott (The Transformers: Windblade) that was launched in 2018.

Aimed at young girls, the franchise focuses on the diverse, younger heroes within Marvel's lineup and their adventures, both as a team known as the Secret Warriors (based loosely on the team of the same name) and as individuals. Beside sharing a similar art style to other Marvel animated properties airing at the same time, most of the franchise is set within its own separate continuity, with changes made to character origins and relationships. The exception to this is the comic books, which are set within the mainstream Marvel comics continuity.

Works in Marvel Rising include: