Anime / Macross: Do You Remember Love? 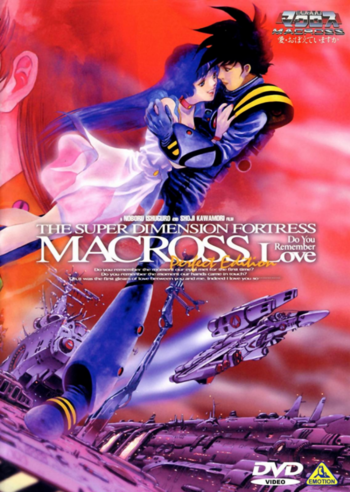 Macross: Do You Remember Love? is a 1984 theatrical rendition of Super Dimension Fortress Macross produced by series co-creators Tatsunoko Production and Artland, with assistance from Topcraft. It was later established in-universe as a movie based on the events covered in the aforementioned series.

The film opens with the Super Dimension Fortress Macross already in space, pursued by the All-Male Aliens, the Zentraedi. Valkyrie pilot Hikaru Ichijou falls for Idol Singer Lynn Minmay after he saves her life. They're captured by Zentraedi forces along with Lt. Misa Hayase, Lynn's cousin Lynn Kaifun, and Hikaru's Big Brother Mentor Roy Focker. Hikaru escapes with Misa when the Zentraedi are attacked by their female counterparts and mortal enemies, the Meltrandi. They escape to a planet that turns out to be Earth, bombarded much earlier by the Zentraedi forces. There, they discover an Ancient Song that may provide them the key to win this war.