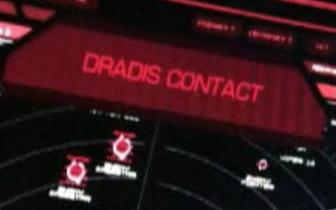 Launch Fighters! Now!
[inside the xenomorph hive]
Hudson: I got signals. I got readings, in front and behind.
Frost: Where, man? I don't see shit.
Hicks: He's right. There's nothin' back here.
Hudson: Look, I'm telling ya, there's somethin' movin' and it ain't us! Tracker's off scale, man. They're all around us, man. Jesus!
— Aliens
Advertisement:

Sometimes, the only way to keep track of objects is through crude sensors or motion-tracking devices. Such devices generally don't do much more than show some blips while making bleeping noises. Yet, this can sometimes amplify the tension of a scene, especially if the actual visual appearance of the objects being tracked is unknown. The closer the enemies get, the more rapid the beeping gets, until it becomes a maddeningly nerve-shredding screech that more often than not causes heroes to snap at just that wrong moment before the monsters burst through and pull them under.

A more recent usage of this trope is to have lots of blips on the radar display, or to have a really big blip appear, as a precursor to something really bad happening. Alternatively, the blips might suddenly disappear, which is even worse for the heroes.

Naturally, this trope has some overlap with Bombers on the Screen and Enemy-Detecting Radar. Contrast The Croc Is Ticking, a technology-free method of building comparable suspense.