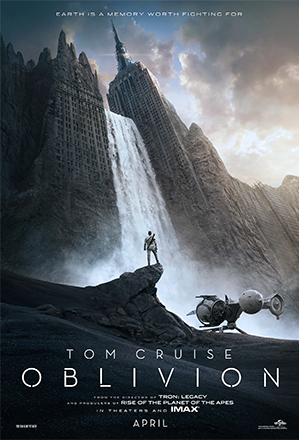 "Earth is a memory worth fighting for."
Advertisement:

Cruise plays Jack Harper, a repairman who maintains a series of drones on the surface of the Earth in the aftermath of an alien invasion which resulted in half of Earth being destroyed. When he finds a crashed spaceship, he starts a series of events that forces him to question everything he knows.

It's something of an "old-fashioned" style of Sci-Fi, i.e., an unraveling mystery/elements of conspiracy with visual effects concentrating mostly on a post-apocalyptic wasteland, as opposed to a series of confrontations in flashy scenery.

Not to be confused with The Elder Scrolls IV: Oblivion nor the 1994 Space Western or its sequel.