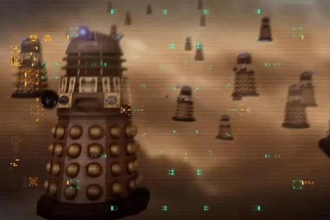 Pictured: about 18 airborne Daleks on Gallifrey. Not pictured: approximately a billion billionnote And, no, that's not an accidental repeat of a word as, according to the War Doctor, there are "a billion billion Daleks" firing on the planet in The Day of the Doctor. more. Welcome to the final day of the Time War. Prepare to be exterminated. Be warned - it's gonna suck.
"Nothing can get past the sky trench. But if just one Dalek made it through, it could destroy this entire city. That's all it would take. One Dalek. One Dalek, acting alone, and we're finished."
— A Time Lord soldier who had NO idea how bad the situation was about to get.

The one where the Daleks Zerg Rush Gallifrey.

A Doctor Who minisode released on iTunes on the 20th of November 2013, serving as another prequel to "The Day of the Doctor". It takes place shortly after the events of the novel Engines of War.

Someone is fitted with a head-cam which, in the event of his death, will transmit all the information to his family drive. It is an ordinary day for this new recruit. However, the installation of his head-cam is giving him problems. He can't speak, and it's causing terrifying mental flashes that indicate ominous events are approaching. He is at Arcadia, apparently "the safest place on Gallifrey". Another soldier tells him that Arcadia is protected by 400 sky-trenches, nobody in history has got through even twonote  Although we all know The Doctor's probably tried it before, just because he can!. However, one Dalek would be enough to destroy them all.

The first soldier has the recruit try out the scanners in his head-cam. While scanning, he notices a blur in the clouds. Zooming in to focus, he sees a Dalek. The recruit's heart starts pulsing madly as the other soldier urges him to lock on and follow that Dalek wherever it goes. Arcadia goes on maximum alert. An alarm is sounded for one Dalek incoming, but then the true threat strikes, as approximately a bullion billion Daleks pour down from the skies. One stops in front of the recruit and fires, killing the recruit.

The last day of the Time War is underway. That same soldier who thought one Dalek was bad enough will now rush down to the residential areas of Gallifrey, after the sky trenches have been lost. He tells the War Council that Arcadia has fallen, and retreats to a ruined street for cover. Here, he will meet an elderly man out of nowhere, asking the soldier that he needs to borrow his gun...