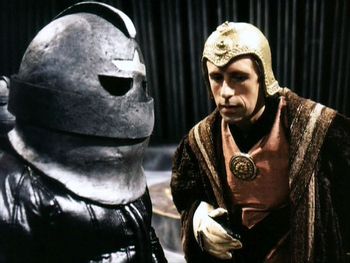 "So lemme get this straight, if I help you get rid of the Doctor and his friends and everyone else, then the Sontarans will have their own show?"
Vardan Leader: Congratulations, Doctor. You show great promise in the application of power. You could be a first grade dictator.
The Doctor: Thank you. You're very kind. That's very kind of you.
Advertisement:

The one with killer tinfoil.

The Doctor is acting strangely. He runs the TARDIS back to Gallifrey, claims the Presidency, banishes Leela to the wilderness outside the Capitol, and lets the Vardan conquerors (floaty bits of see-through tin foil) in. Why is he Not Himself? Is he truly their servant? Is he looking out for Number One nowadays? What's with his sudden new taste in decor?

Being President gives the Doctor access to the Matrix, which contains all the knowledge of the Time Lords. He balances it on K-9's ears and connects it to his TARDIS.

Leela and a really overqualified Time Lady named Rodan roam about in the wilderness outside, where they meet a group of Shobogans, barbarian Gallifreyans (not part of the Time Lord houses) who are really quite bad at being barbarians.

Naturally, there are wheels within wheels, and the Vardan menace is defeated — with two episodes left in the season. Wait... the cheers have stopped. What the... Uh oh, Sontarans! Cue a wild goose chase inside an abandoned hospital the TARDIS, which gives us quite an extensive view of the interior, its gardens (giant carnivorous plants and everything) as well as its fabled swimming pool.

Leela, meanwhile, feels right at home with the barbarians and assembles them into a Badass Army. As their new Lady of War, she organizes a charge of the Citadel and infiltrates the Capitol to help out the Doctor. He uses forbidden technology to destroy the Sontarans, wiping his memory of events — and of the Matrix — in the process. Leela suddenly decides she's fallen in love with Chancellery Guard Andred whom she's just met, and remains on Gallifrey with K-9 to go star in her own spinoff.

The Doctor bids a sorrowful farewell to Leela and K-9 and returns to the TARDIS. He then pulls out a large box from the storage room marked "K-9 Mk II" and starts to grin at the camera.