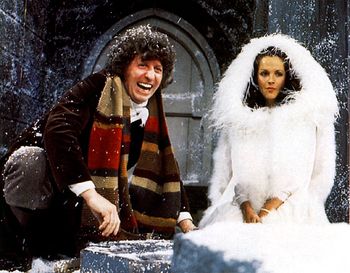 The one with GOD HIMSELF.

A godlike guy in a casual white suit, the White Guardian, interrupts the Doctor's puttering around in the TARDIS to give him a quest: find all six segments of the Key To Time. Why and how and what the thing does isn't explained just yet, but the Black Guardian apparently wants it too. The parts have to be gathered before... well, there's a deadline, but it's not entirely clear when it is. But sooner would be better.

True to form, the White Guardian gives the Doctor some supernatural aid. Her name is Romanadvoratrelundar. She's a still-wet-behind-the-ears Time Lady, fresh out of the Time Lord Academy, where she acquitted herself rather better than the Doctor ever did. And she can out-smug the Doctor.

Romana reads the TARDIS Owner's Guide and effects a perfect materialisation on the icy, remote, pre-contact world of Ribos, location of Plot Coupon #1. They quickly track it to the royal bling room, where it's been disguised as a huge glowy blue lump of jethrik, an incredibly rare and expensive subtance.

But all is not as it seems. The jethrik has been planted there by one Garron: ostensibly a real estate agent showing the planet to a client (Graff Vynda-K, a psychopathic ex-dictator with a talent for shouting and grinding his teeth at the same time). But Garron is really a Snake Oil Salesman running a Violin Scam. Together with his friend Unstoffe, he's trying to trick the Graff into paying an inflated price for the allegedly (but not really) jethrik-rich planet. It works, and the Graff's million-opek down payment is stored in the royal treasury for the night. The next morning the money and the jethrik are gone, and the guards have no idea what the Graff Vynda-K is ranting about.

When the Graff finds out he's being scammed, both team TARDIS and the scammers have to make a run for it, avoiding the treasure room's watch dragon in the process. Unstoffe is rescued by a heretic named Binro, who was cast out for saying the planet moves in relation to the stars. Unstoffe is deeply impressed by Binro's theories and kindly tells him that he's right — he's from the stars, and one day, people will speak of Binro as the prophet of the future. Their Action Film, Quiet Drama Scene is interrupted when Garron contacts Unstoffe via radio and tells him to run. Unstoffe hands Binro his radio device in order to protect him. It has rather the opposite effect, and Binro is brutally murdered by the Graff for helping Unstoffe.

In the ensuing battle, the Graff's best friend dies as well, and the Graff suffers a severe Villainous Breakdown as a result. Since the local prophet-woman has been saying that only one person will survive, he immediately proceeds to murder her and strap a bomb to his one remaining soldier, telling the man that he's destined to make a Heroic Sacrifice. The Graff, now having war flashbacks, walks away while the soldier stays behind to get blown up. Unfortunately for the Graff, the soldier is actually the Doctor in a bucket helmet, who strapped the bomb to the Graff with a bit of sleight of hand and merrily laughs as the Graff gets blown to pieces. He then pulls a similar trick on Garron and Unstoffe, leaving them with a worthless rock while he takes the jethrik, which he converts into the first segment of the Key.