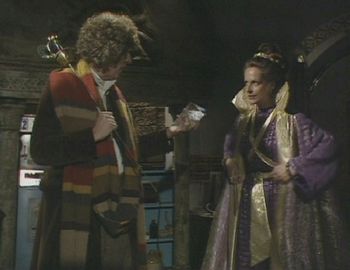 C'mon Doctor, would it kill you to compliment her dress?
"Would you mind not standing on my chest? My hat's on fire."
— The Doctor
Advertisement:

The one with the methhead mascot beast. Also the one where Mary Tamm plays a whopping four separate characters.

Written by David Fisher. This four-episode serial first aired from November 25 to December 16, 1978.

The search for the Key to Time takes the Doctor and Romana to the planet Tara, where feudalism and chivalry have endured. They split up to search, and Romana finds the fourth segment a few minutes in — it's part of a statue. However, she's promptly Trapped by Mountain Lions and captured by the villainous Count Grendel of Gracht, who thinks she's an android double of Prince Reynart's betrothed, Strella. The actual double was created for Grendel by his Ignored Enamoured Underling, Lamia. This way, Grendel is trying to usurp the throne, and will succeed if Reynart doesn't show up for his coronation. Also, he's got Princess Strella locked up in his dungeon.

Meanwhile, the Doctor also gets captured, by Prince Reynart's men. He's taken off to the Prince's hunting lodge and made to repair the Prince's android double, which will be used as a decoy. Grendel's men kidnap the Prince, but the Doctor is able to modify the decoy android so it can attend the coronation in his place.

The Doctor soon realises that Grendel plans to have Romana (or Strella or the android or whoever looks the part) marry Reynart, just so Reynart can be killed that same day and Grendel can proceed to marry the "queen" and take over the country. Grendel is a little annoyed when the Doctor refuses a part in this (after stringing along Grendel with wide-eyed fake enthusiasm for a while). He commissions a Romana android to kill the Doctor, but K-9 sees her for what she is and saves the day, while Romana herself escapes. Lamia dies in the crossfire and ruins Grendel's plans of using androids, since only she had the technology.

Finally, the Doctor rows across the moat to Grendel's castle and swipes the Key segment just before the Prince's men attack the castle, leading to the Doctor and Grendel having an absolutely magnificent Sword Fight. It's ended by the latter diving into the moat and escaping.