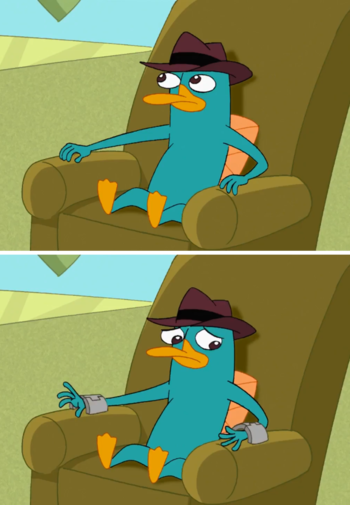 A stock Booby Trap used by Mad Scientists, Supervillains, and other mechanically-inclined bad guys to take prisoners captive, a Shackle Seat Trap resembles a normal chair, sofa, or bench, at least until someone sits down on it. Once they're seated, either the act of sitting itself or some secondary trigger causes sturdy restraints to pop out of its armrests and/or back, ensnaring the sitter and holding them in place. Miraculously, these restraints will always prove just the right size and length to bind them snugly, whatever the sitter's size and height.
Advertisement:

Variants using beds, car seats, operating tables, or other places a potential victim might settle into also occur, though rarely.

Often a form of Schmuck Bait, if the victim already has cause to be wary of traps in the vicinity.

Dana Barrett is abducted by demonic arms sprouting from her sofa as the demon Zuul reveals itself before possessing her.

Dana Barrett is abducted by demonic arms sprouting from her sofa as the demon Zuul reveals itself before possessing her.