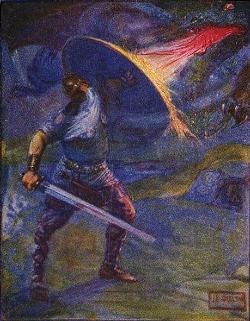 LO, praise of the prowess of people-kings
of spear-armed Danes, in days long sped,
we have heard, and what honor the athelings won!
—Opening lines of Beowulf, in Old English and modern-ish English (loosely translated to try and carry the spirit if not the exact meaning of each word), respectively.
Advertisement:

Beowulf is the oldest surviving work of fiction in the English language — so old, in fact, that the language it's written in is barely recognizable as English (no, really, listen to it

). It recounts two stories from the life of its eponymous Geatish

hero: how, as a young man, he visited Denmark and slew the monster Grendel, then faced the wrath of Grendel's even more monstrous mother; and how, toward the end of his life back in Geatland, he was the only man who dared fight a rampaging dragon.

Oh, and did we mention that it's a poem?

Beowulf is probably the most famous of all Old English literature, and is a staple of university English programs. It is usually read in translation, as it is not only written in a very old form of English, it makes heavy use of a poetic register that is quite different from prose. No one knows precisely when it was written, much less where the story originated. There are a few linguistic hints, like in the very first line the alliteration of "gear" (modern English "year") with g which would change to y in later Old English. Certain lines of the text involve a clearly Christian narrator commenting on the pre-Christian Paganism of the characters, therefore the text is believed to have been the work of a monk recalling a much older story. The only known manuscript contains two distinct styles of writing, indicating more than one scribe was involved in the transcription. This manuscript was also damaged in a fire in 1731, so certain lines of text are obliterated and their contents purely left to conjecture.

In 1936, a lecture by J. R. R. Tolkien, "Beowulf: the Monsters and the Critics" had a lasting influence on Beowulf research. Lewis E. Nicholson said that the article Tolkien wrote about Beowulf is "widely recognized as a turning point in Beowulfian criticism", noting that Tolkien established the primacy of the poetic nature of the work as opposed to the purely linguistic elements. At the time, the consensus of scholarship considered Beowulf childish because they considered battles with monsters rather than realistic tribal warfare to be not worthy of study; needless to say the creator of Middle-earth was having none of that. Tolkien argued that the author of Beowulf was addressing human destiny in general, not as limited by particular tribal politics, and therefore the monsters were essential to the poem. Where Beowulf does deal with specific tribal struggles, as at Finnsburg, Tolkien argued firmly against reading in fantastic elements. In the essay, Tolkien also revealed how highly he regarded Beowulf: "Beowulf is among my most valued sources," and this influence can be seen in The Lord of the Rings.note Two examples of the influence of Beowulf on The Lord of the Rings: the word þeoden, pronounced "theoden", is used several times. And line 2345 appears to have given Tolkien his title: Oferhogaode ða hringa fengel, is usually translated as "Yet the prince of the rings was too proud".

The story has been adapted many times. Some of the adaptations have been quite offbeat: they include John Gardner's novel Grendel, from the point of view of the monster; Michael Crichton's novel Eaters of the Dead (filmed as The 13th Warrior), which purported to tell the historical events that inspired the Grendel plot; and the 1999 sci-fi film starring Christopher Lambert. The 2005 film Beowulf & Grendel was comparatively faithful, yet still somewhat revisionist. The YouTube video, Beowulf, The Storybook Version,

is relatively faithful, but very silly. DC Comics adapted the tale in the 1970s/1980s. A more recent offbeat version was a stage play "Brother Wolf" which transposed the story to the early 20th Century appalachian mountains. Beowulf is the itinerant preacher Brother Wolf, and Grendel is a demon haunting a small mountain town.

Most (but not all) of the Beowulf references on this wiki are to the 2007 film Beowulf, written by Roger Avary and Neil Gaiman, directed by Robert Zemeckis, and starring Ray Winstone. The screenplay for this has similarly unusual diversions from the original story, to say the least, such as overhauling Grendel's mother into a sexy succubus-type creature who births horrible monsters when she seduces mortal men, with the dragon being her child by Beowulf and Grendel her child by Hrothgar. It seems Beowulf has a knack for inspiring artists to put their own spin on the material.

The epic provides examples of: