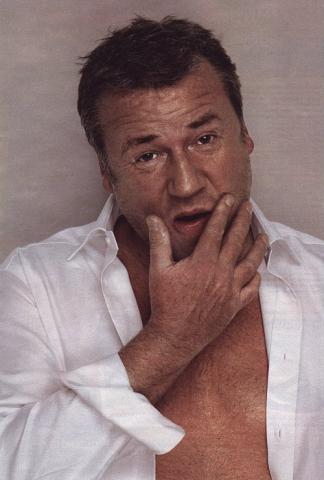 "Leave it you SLAG!!!"
"Ray Winstone is an excellent British actor who tends to play working-class London psychotics. Even when he's the good guy - he was Will Scarlet in a long-running Robin Hood TV show here, and portrayed a hero journalist in Tank Mailing - he's usually fucking terrifying. Only once in (my) recent memory has he played against type in film, as the scared safecracker in Sexy Beast. See, everyone first saw Ray Winstone as a teenager whipping other kids to death with a pool ball in a sock, screaming WHO'S THE DADDY NOW? WHO'S THE FUCKING DADDY NOW? I'M THE DADDY NOW! He's a force of nature, a thing driven by beer and cigarettes and kicking fucking heads in. He's got a chubby face and little boy's eyes that, in the moment, go black and dead like shark's eyes. Reduces London English to a series of grunts and yelps. He is, in fact, The Greatest Living Londoner."
— Warren Ellis, preface to Switchblade Honey
Advertisement:

Raymon Andrew "Ray" Winstone (born 17 February 1957 in Homerton, London) is a British actor who has been acting since 1976.

You'll recognise him when you hear him, usually. He is usually found playing Cockneys (his native accent) and does a good London Gangster. However, don't let that fool you. He's a terrific actor who can definitely go outside his usual type. Also known for a distinctively husky voice.

Has three kids and is a big West Ham supporter.

A former boxer, and reputedly a rather good one, and therefore inherently badass. Roger Ebert was also quite a big Ray Winstone Fan Boy.