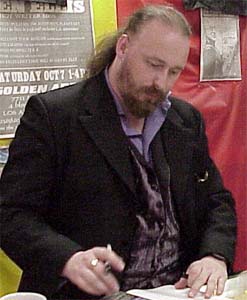 "Alan Moore once told me he works the nine-pic grid because it's cinematic. I told him I work the six-grid pic because it's television. I should think more on that some time."
— Warren Ellis
Advertisement:

Warren Girard Ellis (born February 16, 1968) is a British comic book writer, novelist, and screenwriter. He is known for introducing transhumanist elements to his books, and for complex stories, including Continuity Nods, expies, and Lawyer Friendly Cameos. Like other Britwave authors, Ellis often operates as a one-man Deconstructor Fleet.

Ellis originally was known for his comic work, which fills a large bookshelf. Apart from dozens of creator-owned and work-for-hire projects listed below, major works include:

Starting in the mid 2000s Ellis began experimenting with other forms of storytelling:

Recurring Author Appeal / Author Tracts include nanotechnology, evil corporations, space exploration, people behaving badly, as well a rather unsympathetic view of America and Great Britain. His works regularly feature Black-and-Gray Morality, Violence Really Is the Answer, and This Is Your Premise on Drugs. None of the above makes his work any less inherently readable.

He's also known as one of the very few British comic writers of his generation to have never worked on 2000 AD, though it's certainly not out of disgust.

He lives in a coast town called Southend-on-Sea with his partner Nikki. He had a major health scare in June 2015; doctors initially diagnosed him with a transient ischemic attack (a mini-stroke) before realizing it was a recurrance of a fifteen-year old extremely high blood pressure problem (before he had even started smoking or begun his coffee addiction) that had put him in a coma for six weeks.

In June 2020, dozens of the women Ellis "mentored" described sexual grooming and other predatory behaviour towards younger women by Ellis, documented at https://www.somanyofus.com/

. While the initiator of the accusations insisted both that she didn't want Ellis "canceled" and that he had helped numerous other women without making advances toward them, the fallout was enough that even after a public apology, several of Ellis's scheduled works were removed from publishing notices, and his social media usage has been virtually nil since. As of spring 2022, some of his victims are reported to be working through a restorative justice process with Ellis. It appears most of Ellis’ collaborators and publishers are waiting for that process to complete before moving forward with any new work.

Not to be confused with the Warren Ellis who plays violin for The Bad Seeds.

Tropes associated with Warren Ellis and his works: