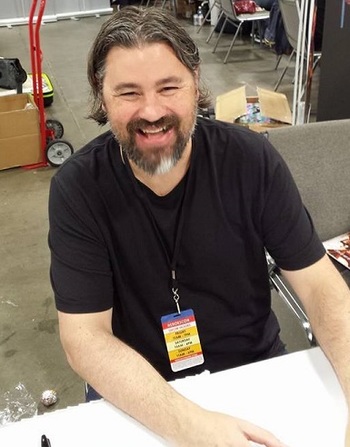 He's here to solve everything.
"I think it's good that we're not embarrassed that we're comic book creators anymore. It's good that people are able to make a good living at doing it, and not doing the traditional sort of mainstream fare."
Advertisement:

Jonathan Hickman (born September 3, 1972) is an American comic book writer and artist. He is known for his intricate storylines (that are planned far, far out in advance) which often involved alternate universes, alternate histories, secret conspiracies, time travel, and mad science.

Hickman began his career as a graphic designer, and originally illustrated his own comics (something he hopes to return to at some point). He first made the mini-series The Nightly News before beginning a lucrative career at Marvel. After becoming one of the premier writers at Marvel, he began to focus more on his creator-owned books, before returning to his old stomping grounds once again.